Three Daughters Deprive Me of Sleep 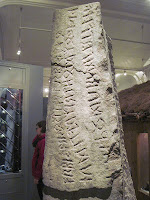 Although my recent visits to Norway (see the previous post for more on these) were not made in a particularly runological frame of mind, I kept coming across interesting runic inscriptions, in particular several involving women. So here's a quick tour of some of these, in the order of their chronology, rather than the order in which I saw them. Most obscure was probably the Tune stone (side B pictured right), well-lit and displayed in the Prehistoric Norway section of the Museum of Cultural History in Oslo, which basically includes everything up to and including the Viking Age. The inscribed stone itself contradicts the OED definition of 'prehistoric' as 'Of, relating to, dating from, or designating the time before written historical records', though I suppose you could argue about what was or was not a 'historical record'. Anyway, pedantry aside, it is a lovely stone with an intriguing inscription. I quote the English translation from Terje Spurkland's Norwegian Runes and Runic Inscriptions (now available in paperback, by the way):

(A) I, WiwaR, in memory of WoduridaR the master of the household, made these runes. (B) I entrusted the stone to WoduridaR. Three daughters arranged the funeral feast, the dearest / most devoted / most divine of the heirs.

Much of the detail is obscure, so do read Terje's discussion of this 'extraordinary piece of writing' to find out what it might all mean.  But there are two particular points of interest. Sometime around 400 AD, daughters could inherit property (Terje suggests that WoduridaR was the father of the three daughters, but had no son, and that WiwaR was his grandson). Secondly, the inscription is metrical, in something not unlike the ljóðaháttr of the Eddic poems. Both the supposed inheritance patterns and the verse form of the Tune inscription have their counterparts in the Viking Age and even later (since the laws and the poems were not written down until after the Viking Age). This means that either we have important evidence for an astounding longevity of certain cultural patterns in Scandinavia, or some odd coincidences. 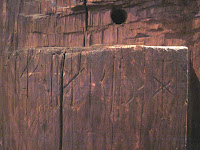 Skipping the Viking Age, for once, it's interesting to note the presence of women in the medieval churches of Norway, both as the subject and object of the statements made in the inscriptions. A wooden pillar now in the Historical Museum in Bergen was originally in Stedje church in Sogndal. Stedje was one of those stave churches that did not survive the rebuilding craze of the nineteenth century, but the pillar at least was saved, along with a finely carved portal, also in the museum. The inscription records that 'Sigríðr of Hváll gave this staff for mercy towards the souls of Arnþórr and herself.' Arnþórr was presumably her husband, and Hváll is the farm Kvåle near the church. A man of that name at that place is mentioned in Sverris saga in the winter of 1183-4, and the saga also mentions the burning of Stedje by Sverrir's Birkibeinar, though the church itself was saved. How all this fits with the runic inscription, if it does, is impossible to tell. Magnus Olsen came to the conclusion that  Sigríðr and Arnþórr were the grandparents of the saga's Arnþórr and dates the inscription to c. 1175. The runes were at about head height and are deeply carved - Sigríðr clearly wanted the world to know about her gift to the church.

Much less obvious, and only discovered in 1966, is a more casual inscription in Bø gamle kyrkje, on the wooden panel of a repositorium, a kind of nook in the south wall of the chancel. The inscription puzzled many learned minds, though eventually Jonna Louis-Jensen arrived at the very ingenious solution. The Old Norse text reads:

which can roughly be translated as 'It deprives me of sleep, it is a children's disease, the enemy of the worker, inhabitant of the mountain, toil of the horse and danger to hay, the bad luck of the slave; people need to work it out.' The simple alliterative stanza poses a question, 'what deprives me of sleep?' and gives the answer in riddling form. Each of the following phrases works out as a word which is also the name of a particular rune, so the 'inhabitant of the mountain' is an ogre, or Old Norse þurs - the name of the third rune. The six phrases give the runes k u þ r u n giving, of course, the female name Guðrún. So that is clear enough. But who was she and who was she depriving of sleep? Normally, only priests went into the chancel... Was he in love, or is it just an intellectual exercise? Is it the effort of working out the riddles that keeps the writer awake? If only we could tell... The inscription is dated to around 1200, when love poetry certainly was in fashion. 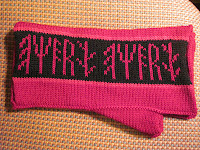 My last inscription comes from this fine pair of wrist-warmers I purchased in Heddal and knitted by a local lady who does other runic knits, too. Unfortunately, the runes don't say anything intelligible, which might be because they are based on an inscription in the gallery of Heddal stave church, which also does not say anything intelligible. Despite unconvincing attempts to make out that the runes represent the date 1242, all we can say for certain is that the runes say either -m-rn or mmrn (by interpreting the last, and possibly the first and third, runes as cryptic runes). Which could, I suppose be a cack-handed attempt to write Maria, to whom the church is in fact dedicated, or, more charitably, an abbreviation for some kind of phrase involving her name. I append a picture of the runic inscription, too, so you can compare, though it was hard to photograph through the protective glass. 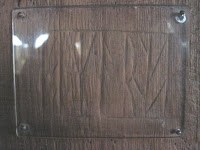