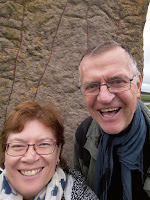 The 29th of this month would have been Terje Spurkland's 72nd birthday. I first encountered him in the academic year of 1980-81, when I was on a scholarship in Norway and attended his lectures on Old Norse grammar, to improve both my Norwegian and my Old Norse. He was certainly a memorable lecturer, even then, but I didn't really get to know him until about ten years later. That was when I attended my first of what have come to be known as the 'Annual Meeting of Field Runologists' which on that occasion in 1990 ranged from Cambridge to Scotland, but with a focus on Northumbria. From then we met regularly at runic and other Norse and Viking events. The last time I saw him was again at one of the annual runologist meetings, in Västergötland, Sweden, in September 2017, where I took this runatic selfie (right) with him. Terje was a devoted runologist, a good colleague, and really excellent company on any runic excursion. He died on Christmas Day in 2018 from an aggressive form of brain cancer, and is deeply missed by all runologists, but also remembered by them and others with great affection. 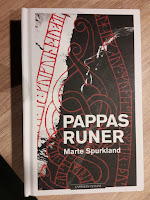 In this, what would have been his birthday month, I have been reading a memoir by his daughter Marte, Pappas runer ('Dad's runes'). It really is a most extraordinary book. Terje had been working for some years on a book about runes, but also about literacy more generally, with a particular focus on the 300 or so years when Norway in particular was a two-script society, in which both runes and the roman alphabet were used side by side, often by the same people. A substantial draft of this book was in existence when Terje's cancer was diagnosed at Christmas 2017. His daughter had the idea to work on it with him as a way of distracting them both from the tedium and anxiety of all the hospital appointments, treatments and general misery of the illness. In the end, it turned out to be a different sort of book, in which a very personal account of Terje's illness and its effect on his family is interwoven with an introduction to runes and runic inscriptions. The ideas about runes and inscriptions are very much Terje's, and derived from his manuscript, but seen through the eyes of his daughter, whose interest in runes only came during this last year of her father's life. Like dad dancing, her father's interest in runes was just an embarrassment to the younger Marte, along with his clogs and old rucksack, his firm opinions on some aspects of the modern world, his oft-repeated stories, and his generally friendly grumpiness. This book is the story of how, just in time, she discovered why runes are so fascinating and why her father was such a gifted communicator of that fascination. 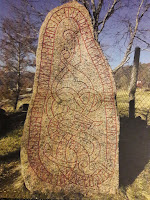 Obviously, the book is of great interest to those of us who knew Terje and who also love runes and runic inscriptions (though I think few people loved them quite as much as Terje did). Terje was a very popular teacher, and an engaging speaker, and his voice shines through much of what Marte writes about runes. In this way the ideas he had for his book find their way into print, though in an unusual context. It's hard for me to judge how the book would strike those who do not share these obsessions, or do not know the people concerned. However I believe the book has done very well here in Norway and even won a prize. It is certainly well-written and Marte switches between the two threads expertly. What I find fascinating is how well she has woven together the story of the rise and fall of runic writing with the story of Terje's last year on earth. There is an obvious metaphorical connection, and also many surviving runic inscriptions, especially on stone, are memorials to the dead. But some were raised by living people to commemorate themselves, and the book recalls how Terje commissioned the lovely stone pictured above right for himself and his wife Marit.

Marte finds even more intricate connections, discussing runic inscriptions that echo the events and memories of the book. For instance, the 8th-century human skull with runes from Ribe, in Denmark, comes at the point in the book when Terje has had an operation on his brain. The Ribe skull has a hole in it which might be evidence of Viking Age trepanation, also a form of brain operation. The Jelling stone erected by Harald Bluetooth is linked to her father's late adoption of a very simple mobile phone, which nevertheless also had Bluetooth technology. The Eggja stone, which probably recounts a shipwreck, recalls Terje's feats of rowing. These took place in Terje's childhood tracts of Nordmøre, and visits there during the last year of his life evoke other inscriptions, like the Kuli stone and the very fine inscription in Tingvoll church, near the family cabin. In fact, much of the book evokes Terje as he was before struck down by illness, strong, reliable, often taciturn, kind, and with a wicked sense of humour. To me it's a familiar picture, and yet I also learned a lot about Terje the father, the husband, and the human being, as well as the runologist. He's lucky to have had such a daughter, even if her runic enthusiasm came a little late! Thanks, Marte.