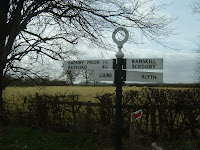 In an item on East Midlands Today, geneticist Turi King of the University of Leicester is appealing for volunteers from Nottinghamshire and Leicestershire whose genetic profile might help unravel the influence of the Vikings in this area. Clicking on this link should bring you the news clip.
Posted by Viqueen at 20.2.08 No comments:

Iceland Review Online from the 4th of February provides an 'audio slideshow' of the Þorrablót, the traditional Icelandic mid-winter feast when people 'ate dried fish, smoked lamb, putrefied shark and soured blood and liver pudding along with other soured meat products – ram testicles included' in the absence of any fresh food. This feast is particularly popular among Icelanders abroad who like to celebrate their Icelandic origins. The article admits that 'not everyone is capable of downing the ... food'!
Posted by Viqueen at 11.2.08 No comments:

Some years ago the grave of a 'Viking' woman was found at Adwick-le-Street near Doncaster. Now, archaeologists have discovered a whole cemetery (35 bodies) there, according to reports in several newspapers (e.g. The Sheffield Telegraph). Although the headlines trumpet a 'Viking burial site', the detail in the articles make it clear that archaeologists have dated the site to between the 5th and the 9th centuries, making it equally possible that they are Anglo-Saxons. Still, we await further information with interest!
Posted by Viqueen at 2.2.08 No comments: