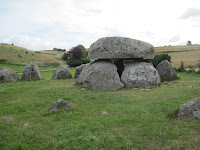 ... are actually some of my favourite things, especially when fashioned by human beings into something meaningful to them. Yesterday was excursion day here at the Fifteenth International Saga Conference in Århus. I naturally chose the excursion likely to include the greatest variety of interesting stones. The excursion was to Djursland, the peninsula north-east of Århus, with lots of interesting features, including a dialect that has kept the three genders of Old Norse, that Danish has otherwise done away with. The lithic delights on offer went from the Stone Age right through to the medieval period. We started off with Poskær Stenhus (pictured), apparently the largest Neolithic cairn in Denmark. Not perhaps the largest Neolithic monument on the planet, but a very nice one in a lovely location on a sunny day, in one of the hillier parts of Denmark (more on this later). 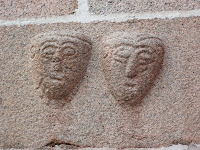 The Danish landscape is littered with extremely handsome stone churches, mostly apparently first built around 1200, but then added to later. So there were plenty of medieval delights, like the wall paintings at Hyllested (the link will take you to a lovely picture of the church and detailed information on the paintings), or the Romanesque portal at Rimsø, (which I confess I missed, being too interested in the rune stone at the same place), or the oldest stained glass (c. 1300) in Scandinavia at Virring church. Stonewise, I particularly liked the two little heads (pictured) on an outside wall of Ålum church. 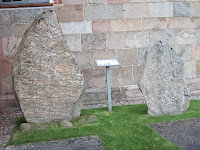 But the real reason for going on the excursion was, of course, the eight rune stones we were promised. I had seen most of them before, but that was nearly two decades ago, so it was great to revisit them. The two I'll mention are the two outside the church at Ålum (pictured). As usual when runologists are gathered, we stand around and discuss every aspect of both the object and the inscriptions and this pair offer much rich material for discussion. The larger one (which by the way has an image of a mounted warrior on its reverse) has the inscription 'Végautr raised this stone in memory of Ásgeirr, his son. May God well help his soul.' The smaller one says 'Þyrvé, Végautr's wife, had this stone raised in memory of Þorbjörn, son of Sibba, her sister's son, whom she cared for more than a dear son.' So many questions... Why did the two young men die? Were they together when they died, was it on an expedition abroad, a local accident, an illness? Were they young men or only children? But even more so, what was the family situation? Why did Þyrvé not participate in the raising of the larger rune stone? Was she not Végautr's wife at the time, or was Ásgeirr perhaps not her son but that of some concubine? Why was she so fond of her nephew Þorbjörn? Had her sister died and she perhaps looked after him? If Ásgeirr was her son, was she telling the world she preferred her nephew to her own son? These lapidary texts give no real clue, and various other possible explanations spring to mind. 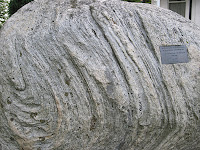 My final old stone for today comes not from yesterday's excursion, but today's. After a full day of papers (several of them very interesting indeed), we went on an evening excursion to Himmelbjerget, apparently Denmark's third highest eminence at 147 metres (don't ask me about the other two, but they're certainly not much higher). Outside the hotel there, I saw this beautiful stone, which reminded me of the stones I had seen on the Isle of Lewis over two years ago, particularly those at Callanish. The little plaque on it had a trite little verse which nevertheless concludes with lines also appropriate for signing off this blog:

I en tid hvor alting forgår, er det visse ting som stadig består.
(When everything passes away, some things are here to stay.)

I guess that's just what I think of old stones, too.