One Day Without Vikings?

I am a serial migrant. Twice in my life I have made the move to a new country (not including shorter stays of a few years in yet other countries), in both cases becoming a citizen and intending to stay. It looks like the second one is my forever home - I have now been a UK citizen for a quarter of a century and have no plans to move. In my first adopted country, I was schooled from a young age in the slogan 'No taxation without representation!' and that motivated me to become a citizen in my second adopted country - I was by then paying taxes and wanted to take a full part in the life of the country that was now home. I therefore naturally have an interest in tomorrow's National Day of Action on Feb 20th to Celebrate the Contributions of Migrants to the UK, or @1daywithoutus / #1daywithoutus.

But I also have a professional interest in the contributions of migrants, at least those in the past. If we take the long view historically, then of course everyone in these islands is a migrant, at least since the last Ice Age covered them, and I do think everyone should reflect on that simple fact, as well as on the contributions of migrants, whether over the last 10,000 years, or the last 10 years. Among the many identifiable groups who have made an enormous contribution to the life of these islands are the people of Scandinavian origin we call 'Vikings', who settled here between the ninth and eleventh centuries. To some they are best known for raiding and pillaging, as if they were the only people in the Early Middle Ages who did these things (they weren't). But most people also know that they moved into large swathes of eastern and northern England, into large parts of Scotland, and that they founded towns and other settlements in Ireland. These immigrants were not raiders and warriors, but farmers and traders, and families with women and children as well as men.

What was their contribution? Well, by farming the land and engaging in local, national and international trade, they made the contribution to the economy that we normally expect of immigrants (and the indigenous inhabitants, too?), and they paid their taxes. They came in sufficient numbers for their language and culture to become an indelible part of the language and culture of these islands. Even the first word in the previous sentence comes from Old Norse, this infiltration of some of the most basic features of the language (in this case a pronoun) being unprecedented in any other migration other than that of the Anglo-Saxons before them. At the other extreme, the English word 'law' comes from Old Norse - the Vikings gave us the very foundation of this nation's existence. It is not possible to have one day without Vikings, even now in the twenty-first century.

Words and place-names of Old Norse origin are around you, everywhere, everyday. You can find out more about the Vikings' contribution to the English language through the Gersum project. You can learn more about English place-names of Old Norse origin at the Key to English Place-Names. You can also find out about physical objects from the Viking period through for example the Portable Antiquities Scheme and the Corpus of Anglo-Saxon Stone Sculpture. And this year is the Year of the Viking, when you can come to Nottingham for a special British Museum / York Museums Trust exhibition opening in November. As well as the exhibition, there will be a lot of different events dedicated to explaining the contributions of those migrants, the Vikings, branded as 'Bringing the Vikings Back to the East Midlands'. These will be advertised on the website of the Centre for the Study of the Viking Age at the University of Nottingham, so keep your eye out there! Or just follow Viking Midlands on Twitter - the project is currently in its infancy but more information will follow soon.

In the meantime, remember the migrants, not just tomorrow, but every day! 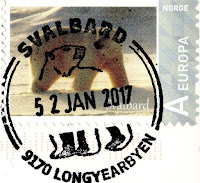 My excellent friend the Snow Queen (I call her that for reasons you may or may not be able to work out) has written about our arctic adventures, so I don't have to. Thanks! But since the polar bear was such a leitmotif of our travels, particularly in Svalbard, I thought I'd follow up with a little footnote rounding up some of the polar bears in Old Norse-Icelandic literature. But just before that, if you think there is something funny about the franked stamp to the left (a genuine one on a postcard that I sent), you're right. There aren't 52 days in January. I'm assuming that's a typo for 25 (the day after we left), but I'm wondering how it came about... Do they still use hand stamps with those rotating numbers for setting up the date?

Anyway, back to ice bears. Of course everyone's favourite and the best known example is from that staple of beginners' Old Norse courses, the Tale of Audun from the West Fjords, as it has most recently been translated. I don't want to spoil the story for those who have not read it yet - it's a short tale that will give you great pleasure and also food for thought! But basically it concerns a young Icelander who makes his way in the world by working for a travelling merchant in Norway and Greenland. In Greenland he gives all he has for a bear. Then, through a really risky series of voyages, involving treacherous stewards, encounters and delicate negotiations with the kings of Norway and Denmark, and a tough pilgrimage to Rome, he returns to Iceland a wealthy and respected person. The bear disappears partway through the story and we never really find out what happened to the creature. I guess its real role in the story is to illustrate both Audun's risk-taking and his cleverness. Having given all he had for a bear, a bear from Greenland, and therefore a rarity and a 'treasure' (as the story calls it), it takes real guts and wits to transform that bear into a fortunate outcome for himself, indeed an outcome that is not at all certain until the end. I haven't spoiled the story for you because it's how he does it that is the real interest of the tale. Indeed, the American professor of law William Ian Miller has written a whole book about the intricacies of this jewel of Old Icelandic narrative (though beware, students, there are two versions of the tale, with some interesting differences).

Given the long sea-voyages involved, and the nature of polar bears, one has to assume that when Audun first acquired it in Greenland, the bear was a cub (compare the stuffed version we saw in the museum, right). Audun was not himself a hunter, the story makes clear that he paid for it. The story also makes clear that things got a bit tricky when he couldn't afford to feed it any more, as it must have grown faster than he anticipated and a hungry polar bear is a fearsome sight to behold.

Audun's tale is set in the middle of the eleventh century. Giving polar bears to important people seems to have been quite the fashion back in those days, though we're never really told what these VIPs did with them. Presumably, they died an early death, but their skins would still have made a nice decoration for the royal hall. Iceland's first bishop, Ísleifr Gizurarson, took a hvítabjörn 'white bear' with him to the emperor Heinrich III in Saxony on his inaugural voyage in around 1056, which did the trick as Heinrich gave him his protection for the rest of his journey throughout the empire, according to Hungrvaka (ch. 2). But Ísleifr did not go to Greenland for the bear, rather the text explicitly says the bear was kominn...af Grœnlandi 'come from Greenland'. Perhaps someone else brought it, or the bear might have come floating to Iceland on an ice floe, something which still happens nowadays, most recently last summer. Nowadays it does not generally end well for the bear because they are a real danger to both humans and livestock. And I wonder if Ísleifr's bear may not rather have ended up as a rug than as a real, living animal in Saxony....

Similarly, the hero of Vatnsdœla saga, Ingimundr inn gamli, having only recently arrived in Iceland, sails back to Norway to get some timber to build himself a splendid dwelling, and takes with him no less than three bears (a she-bear and her two cubs) as a gift for his patron King Haraldr Finehair, which he graciously accepts (chs 15-16). No doubt the bears played their part in the king's extremely generous return gift of a ship loaded with timber, but then Ingimundr was one of the few settlers of Iceland who was in good odour with that king. The other interest of the anecdote is that Ingimundr and his men found the bears on the ice during the winter, when there was a lot of ice around. In the north of Iceland, a bay (Húnaflói), a fjord (Húnafjörðr) and a lake (Húnavatn) are all supposedly named after the bear cubs they found (húnn being the word for a bear-cub), as can be seen from the map above. Well, it's a nice story, though probably apocryphal.

In Grœnlendinga þáttr, a short tale set rather later, in the twelfth century, the inhabitants of Greenland twice try to use bears to ingratiate themselves with important people, only once successfully. In the very first chapter, we meet the important and well-respected Sokki, who feels the community is not complete without a bishop, and sends his son Einarr to Norway to arrange this, with gifts of walrus ivory and hides. Once the bishop thing is sorted (bishops didn't really like the Greenland gig), Einarr gives King Sigurðr Jórsalafari a bear which he happened to have brought with him from Greenland, in return for which he gets praise and honour from the king. Later in the tale, things didn't go so well with the Norwegian troublemaker Kolbeinn, who had killed Einarr and pleads his cause with King Haraldr gilli in Norway with the aid of the gift of a polar bear. But the king gathers that Kolbeinn is not telling the truth and kómu eigi laun fyrir dýrit 'no reward was forthcoming for the animal'. Soon afterwards, Kolbeinn gets his comeuppance and drowns.

These are just some of the most well-known instances of polar bears in Icelandic texts. Having started to look into it, I've realised there are many, many more, far too many to squeeze into one blog post. So I'll save some of them for another occasion.
Posted by Viqueen at 5.2.17 2 comments: