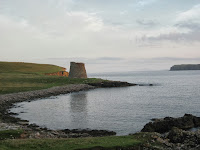 One of the highlights of my recent visit to Shetland was an evening trip to Mousa, an island location that, like Eynhallow or Skellig Michael, is often difficult of access because of tides, winds or weather. However, we chugged over a very calm sea on the delightful Solan IV with lovely views in the evening sun of the broch, an Iron Age structure of indeterminate function that has two particular points of interest. One is that, though like all brochs it no longer stands to its full height, it nevertheless stands higher than any of its fellows. The other is that it is mentioned in two of my favourite sagas, in both cases in connection with interesting anecdotes. There is no doubt that this was a major landmark for the Vikings, on the sea route along the east coast of Shetland and thus on the way to all points south. 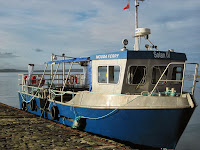 Egils saga (chs 32-5) tells of a young man from Sogn in western Norway, Björn, described as a great traveller, 'sometimes on Viking raids, and sometimes on trading voyages', and a very capable man. He falls in love at a party, as one does, with a beautiful girl, Þóra Lace-sleeve, and abducts her from her home while her brother is away. His father, who is friends with her brother, ensures that the two live like brother and sister, but does not insist on sending her back home. In the end, with the connivance of Björn's mother, the young couple elope. On their voyage south, they are shipwrecked on Mousa. They get to hear that the king of Norway wants Björn killed, so they quickly get married then and there, and spend the winter in the broch. They then make off to Iceland, where they end up at Borg, at the farm of Egill's father Skalla-Grímr. The story ends happily enough for the young couple, though there are many further ramifications for the plot, which you'll have to read the saga to find out, if you haven't already! 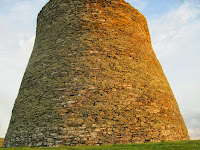 Strangely enough, the other reference to Mousa in saga-literature also involves an elopement. In ch. 93 of Orkneyinga saga the jarl Haraldr Maddaðarson sets off from Caithness to Shetland, intending to kill a certain Erlendr ungi who had proposed to Haraldr's mother Margrét, and been refused by her son. Erlendr takes Margrét to Mousa, where Haraldr attempts to ambush them, but finds it impossible to attack the broch. In the end, the two men are reconciled and become allies, and the couple get married. Having played her part in Northern Isles politics, Margrét is then out of the saga.

Although the Orkneyinga saga anecdote is set in a chronologically later period than the Egils saga story, I can't help wondering if the latter is modelled on the former. Orkneyinga saga is an earlier text than Egils saga, and we know that Snorri Sturluson read it (because it is mentioned in Heimskringla). So if he also wrote Egils saga (a big 'if', but certainly not impossible), then he might well have modelled his story of a romantic young couple on that of the slightly less romantic middle-aged couple. Or is it just that Mousa is such a romantic place that it spawned more than one fanciful tale of people's adventures there?
Posted by Viqueen at 28.9.13 No comments: