One of our students has drawn attention to the fact that there is a Danish-produced film called Valhalla Rising in preparation for release in 2009, having filmed in Scotland in 2008. I wonder what that's about? The synopsis on IMDb does not suggest it has any connection with Clive Cussler's Dirk Pitt techno-thriller with the same title (2001), though both do seem to involve strange voyages to North America (maybe they've just taken out the techno bits). The film will apparently be about 'One-Eye, a mute warrior of supernatural strength' who 'discovers his true self'. Sounds riveting. Actually, there's a more normal-sounding synopsis here, though it still sounds a bit overwrought for my taste... Here's some info about it from the Daily Record - for those who know about these things, it will star Mads Mikkelsen.
Posted by Viqueen at 29.12.08 No comments:

I have just caught the repeat of Joanna Lumley in the Land of the Northern Lights on BBC2. It was really refreshing, immediately after the weather forecast moaning that the temperature was falling to -1C, to hear someone who actually finds romance in cold, snow and northern lights. The northern lights themselves were absolutely fantastic, and well worth watching the programme for on their own, but the rest of it was good fun too. 'We know that the Vikings invaded Britain with Lofoten dried fish in their knapsacks' - I'd love to know where that came from (especially the knapsacks...). It was revealing that the Sami seemed to speak better English than the Lofoteners; of course half of the latter were Poles. Thanks for a great programme, Jo, and especially for showing your passion for all things northern, as well as quite a range of fetching snow-suits.
Posted by Viqueen at 29.12.08 No comments: 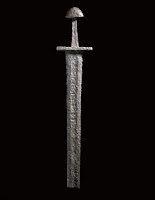 Yesterday's Guardian reports recent research which shows that not all Viking swords were reliable. While they were sharp enough, some were prone to shattering when used, and it was apparently impossible to tell this just by looking at the sword. The research appears to relate only to the Ulfberht swords and it is not clear how many they have tested, though there is the intriguing suggestion that some of the 'fakes' (as they call them, i.e. the inferior swords) were designed for graves and possibly not for use at all. I look forward to some proper discussion of this research somewhere... Interestingly, a 'proper' Ulfberht sword was auctioned at Christie's in May for over £9,000, though another one without Ulfberht's name (but perhaps in better condition) sold for over £14,000.
Posted by Viqueen at 28.12.08 No comments:

I've been reading Finlay Macdonald's Crowdie and Cream (1982) after just catching a bit of the third episode on BBC4. As well as being a good example of Celtic Fringe autobiography, it has some interesting Harris folklore, in particular a story about how Viking invaders are bamboozled by the local fairies:

...long ago, an army of warriors from a foreign land had come ashore on the beach and had set about plundering and pillaging the land as they had done up and down the whole of the rest of our coast. But here, in this very hollow, they had come face to face with a host of little people - fairies who, instead of fighting the foreigners, made them welcome and made them sit down and rest and eat and drink their fairy food. And as the fierce Norsemen nibbled the tid-bits their tiredness and their fierceness left them, and they began to hear the most beautiful music that they had ever heard in their lives and they began to dream dreams of unsurpassed beauty. One by one the warriors fell asleep and when the last of them had nodded off the fairies pulled them down into their own world on top of which we were sitting now. It was a world of music and milk and honey and the wild men had liked it so much that they never came back from it again, and never again troubled the people of Harris.

This all takes place in Scarista, a Norse name if ever there was one... 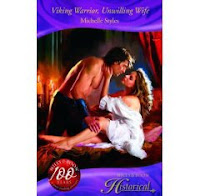 Not even Harlequin romances are immune from the Vikings! A recent one (published June 2008), by Michelle Styles, is entitled Viking Warrior, Unwilling Wife (pretty much sums up the genre, that!). Styles writes what are known as 'Unusual Historicals' and ranges across a number of periods. The cover of this one is definitely more Harlequin than Viking, but the author has clearly done some research for the story, which is apparently a sequel to an earlier book of hers called Taken by the Viking. In this new book, the heroine Sela is reunited with her ex-husband Vikar Hrutson, who 'knows the truth about Lindisfarne.' Sounds fascinating... Read an excerpt from the book on the author's website and there is an interview with the author here.
Posted by Viqueen at 14.12.08 3 comments:

There Were Eleven Ravens...

In his Guardian Diary today, Hugh Muir records the passing of one of the ravens in the Tower. Apparently the kingdom will not fall yet, as there are still ten left, 'including Baldrick, Gwylum, Thor, Hugin and Munin.' The one that died was called Gundulf. All very pseudo-medievaly, though at least Hugin and Munin are proper raven's names. Calling one of them Thor, though, rather cuts that god down to size, placing him on the same level as his father's ravens... Does anyone know what the rest of the ravens are called and who named them?
Posted by Viqueen at 10.12.08 1 comment: