Man of the North 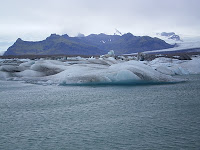 Yesterday's Guardian has a feature, by Fiona MacCarthy, on William Morris as 'Man of the North', illustrated by a nice sunny picture of Jökulsárlón without the tourists (see right for my cloudier equivalent). The feature is occasioned by a new four-part sequence for chorus and orchestra by composer Ian McQueen, Earthly Paradise, in which apparently 'Morris's Icelandic journeys are a recurring theme' and which premieres at the Barbican on 10 April (and a re-release of MacCarthy's biography of Morris in July). MacCarthy notes that 'his journals ... are precious and unique because they are so simply and beautifully written with the informed sense of wonder of a deeply learned and sophisticated man'. I would certainly second that. Anyone who has been put off by Morris's medievalist poetry and prose should forget those and read the journals instead. Here's an extract in which Morris describes Borg, home of both Egill Skalla-Grímsson and Snorri Sturluson:


I turned away, and mounted the 'Burg' under which the house stands, a straight grey cliff grass-clad at top, sloping gradually down toward the lower land on one side. There are plenty of flowers in the grass at the top, clover and gentian chiefly, and I sat there in excited mood for some time; of all the great historical steads I had seen this seemed to me the most striking after Lithend; yet for some reason or other I find it hard to describe: southward lay the firth, quite calm and bright, those great mountains reflected in it with all detail, and over their shoulders the bright white jokuls are to be seen from here: the great circule of mountains is very awful and mysterious under a beautiful peaceful sky: they come nearly to the firth-side at the mouth of it, but from their outmost buttress a long low spit of land runs out into the sea, and beyond this is a line of skerries, beyond which one can see the surf breaking at the deep sea's end; a creek runs up from the firth toward Borg and a little stream falling through the rock ledge, of which this cliff is the highest end, goes into it. Eastward the country, ending with the low hills broken by Baula, looks little different hence to what it did from horseback, the plain somewhat flatter and the hills somewhat higher, that is all. Burgfirth, I may mention in case you forget it, or are hazy about your saga geography, is one of the great centres of story in Iceland... [William Morris, Icelandic Journals, 1969, pp. 153-4]

This is very much the artist's eye taking everything in, but written in such an engaging way that it is hard to put down. There are lots of little comic details about the travails of camping and riding on horseback to vary the pace, here the intrepid travellers are heading north to Grímstunga:

as we rode now we could not see a rod in front of us, the rain, or hail, or sleet, for it was now one, now the other of these, did not fall, we could see no drops, but it was driven in a level sheet into our faces, so that one had to shut one eye altogether, and flap one's hat over the other. Magnússon and Evans stood it best, working hard at driving the horses; Faulkner, worried by his short sight, and I by my milksopishness, tailed; I was fortunately mounted on Falki, who was very swift and surefooted, and so got on somehow; but I did at last in the early part of the day fairly go to sleep as I rode, and fall to dreaming of people at home: from which I was woke up by a halt, and Magnússon coming to me and telling me that my little haversack was missing: now in the said haversack I had the notes of this present journal; pipe, spare spectacles, drawing materials (if they were any use) and other things I particularly didn't want to lose, so I hope to be forgiven if I confess that I lost my temper, and threatened to kill Eyvindr, to whom I had given it at Búðará: he, poor fellow, answered not, but caught an empty horse, and set off through the storm (we had ridden then some three hours) to look for it and on we went. [p. 87]

It all ends happily when the travellers arrive at Grímstunga, where they dry out, 'began to feel that we had feet and hands again', and get coffee, brandy, and real beds to sleep in. Eyvindr duly appears with the haversack and is forgiven, Morris 'thanked him with effusion', but doesn't appear to have apologised, only 'hope[d] he will forget my threat of this morning'.

Greenlanders' DNA has some Celtic Elements 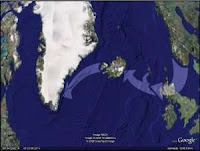 Recent research into some skeletons (dated to c. 1000) from an unnamed churchyard site in Southeast Greenland suggests that their genetic profile is similar to that of the Icelanders, i.e. that they have some 'Celtic' genes. The article unfortunately doesn't give much detail (where the site is, how many skeletons were analysed, and so forth), but the interview with Jette Arneborg stresses that these Greenlanders were Norse in their culture, even if they had some Celtic genes (and she too suggests it was mainly the women who had that heritage). In other words, the Greenlanders came from Iceland. As we knew all along. For more information on research projects in Greenland, read this summary.
Posted by Viqueen at 26.3.10 2 comments: 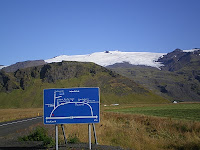 It was my first trip to Iceland, many years ago, that opened my eyes to the wonders of geology. It was a tourist cliché, but when I stood at Þingvellir and was told that I was standing on the faultline between the continents, then plate tectonics suddenly made more sense than from any number of diagrams. On that same trip, we went to Vestmannaeyjar and stood on the still-warm sulphurous volcano that had erupted on Heimaey only a few years earlier, in 1973. There's something about Iceland that brings out the latent geologist in everyone - or at least in me. It certainly makes me like to think I should have had an alternative career as a geologist, though it was already too late then, on that first visit. Icelandic volcanoes, unlike those in some other parts of the world, tend to erupt slowly and rarely cause loss of life. So, despite the destruction of houses and roads, we can marvel at their majesty and wild, ferocious beauty, and understand how a poem like Völuspá came to be composed under their influence. And now it's happening again. Eyjafjallajökull, which last erupted in 1821, is acting up. According the BBC report, some 500-600 people have been evacuated, ash is falling everywhere, and aviation is not currently possible. The picture shows the area on a glorious late summer day last year, when molten lava and ash were the furthest things from anyone's mind. 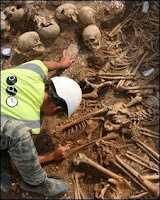 It's all over the news media today: the 51 bodies in the mass grave discovered a few months ago in Dorset are 'Vikings'. Insofar as the media reports are accurate, the bodies are identified as Scandinavian on the basis of isotope analysis of the teeth of 10 of them, while the grave has been radiocarbon-dated to the period 910-1030. The bodies are all of men, in their twenties or thirties, they have been decapitated, and the archaeologists speculate that this was done in front of an audience (not clear why they think this), and that the men were stripped naked before being executed, as there is no evidence of pins or other dress accoutrements. Of course we have always maintained that the Vikings had no monopoly on violence - man's inhumanity to man is well-documented throughout history. For further info, see the BBC's report, or that of The Guardian.
Posted by Viqueen at 12.3.10 No comments:

Yesterday the winner was announced in a competition to design some kind of protection (from wind, weather, tourists?) for the two rune stones at Jelling. The winning design is quite space age and seems to involve two large glass cases with one side of stone or concrete. They do seem to fulfil the function of protecting the stones while leaving them (a) visible and (b) in their original position. One day, there will be those of us who remember when we could go right up to the stones and touch them! But I guess that's not a good idea if everyone does it.... For a good website about Jelling, the church, the mounds and  the rune stones, see http://www.jelling.dk/, and http://jelling.natmus.dk/ for a website about the current research going on at Jelling.
Posted by Viqueen at 5.3.10 1 comment: