Coursing Through the Deepest Snow

It's nearly the end of the cross-country skiing season. I used to indulge in this wonderful sport but lack of time, snow and other things have intervened these last few years. Nevertheless, frequent visits over the last few months to my family where they have Eurosport on the telly have enabled me to indulge vicariously by watching the racers, whose technique is lightyears ahead of anything I could once produce. I particularly enjoyed the many successes of the Norwegians, with their fetching red outfits and stars like Therese 'Duracell Bunny' Johaug, with her amazing performance in the Holmenkollen 30 km last weekend. That did make me nostalgic, since many years ago I lived up on Holmenkollveien and skied around those same tracks myself.

Of course the Norwegians should be best at skiing since they seem to have invented it, as suggested by Stone and Bronze Age rock carvings. Adam of Bremen, from whom the title quotation comes, associated skiing with the Scritefingi, the northern neighbours of the Norwegians and Swedes, or Saami as we might call them. He doesn't seem to have associated the Norwegians themselves with skiing, but then what do you expect, as his information mostly came from the King of the Danes, and when were they ever any good at skiing? (See my comments on Danish eminences in one of last year's blogs, and they don't get that much snow, either.)


Another non-skiing nation appears to have been the Icelanders. Clearly, they were familiar with the concept of skiing, from their regular trips to Norway, but they don't seem to have indulged in it themselves. Skiing gets a mention in ch. 163 of Sverris saga when King Sverrir sends a company of lads from eastern Norway to spy on his opponents because 'there was a lot of snow and good skiing conditions, while walking conditions were so bad that one would sink into deep snowdrifts as soon as one left the track' - an exact description of why skiing is necessary in some places, possibly written by an Icelander who, lacking skiing skills, had tried the walking in the snow lark. A slightly odd skier is Earl Rögnvaldr of Orkney who famously boasts in his poetry of his nine skills, one of which is skiing. Orkney doesn't get that much snow and when it does, it mostly blows away! But of course Rögnvaldr grew up in southern Norway, near the mountains of Agder, perhaps even in Telemark, that real home of skiing. 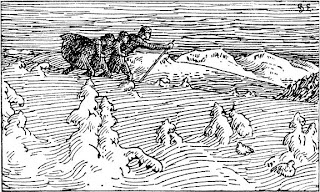 My favourite skiing anecdote is from Snorri Sturluson's Heimskringla, where he has a  bit of a cheerful dig at his own countrymen. In ch. 141 of the saga of St Óláfr, we're told of an Icelander called Þóroddr Snorrason who, along with a companion, comes across an archetypal Norwegian backwoodsman, Arnljótr gellini, who helps them to escape after many adventures on a tax-collecting expedition to Jämtland. Trouble is, it's winter, and he's hoping to help them escape by skiing, but they just can't do it. So in the end he puts both Icelanders on the back of his own skis and, we're told, 'glided as fast as if he were unburdened', as wonderfully illustrated in Halfdan Egedius' woodcut interpretation (pictured) for the 1899 Norwegian edition of Snorres kongesagaer.
Posted by Viqueen at 20.3.13 4 comments:

Today's Guardian review of BBC 1's Shetland, based on Ann Cleeves' Red Bones, concludes that 'Sometimes ... a place is as compelling as a plot'. Which is pretty much what I said on this blog some time ago.

I suppose it was the need to establish the place more obviously that led the producers to introduce an Up-Helly-Aa subplot, making it all somewhat incongruous, since the story revolves around an archaeological dig (hardly likely in Shetland in January). Still, let's not get too fussy. This also gives the producers a chance to introduce various Norse mythology references that weren't in the original book. Shetland is, after all, as Viking as they come.
Posted by Viqueen at 11.3.13 No comments:

As was recently pointed out on Twitter by Dave Gray, star presenter of Radio Orkney, 'Folk under the age of 50 are reading Walrus tweets containing the phrase "Coo-coo-ca-choo" and wondering what's going on'. Has John Lennon been reincarnated? I refer of course to the young male walrus that had a brief holiday on North Ronaldsay in Orkney the other day, just as I did almost a year ago.

Walruses are iconic in Norse and Viking culture. My esteemed colleague in Aarhus Else Roesdahl has written extensively about the export of ivory from their tusks from Greenland and across medieval Europe, and of course this ivory is the material of the Uig playing pieces or everyone's favourite 'Lewis chessmen'. But walruses are iconic in early medieval texts, too, such as the account of Ohthere, a Norwegian at King Alfred's court in the late ninth century, who said he travelled north for þæm horshwælum because they had such excellent bone in their teeth. Walruses rarely appear in Iceland (let alone North Ronaldsay), but the place-name Rosmhvalanes in the south-west of the country confirms some archaeological finds which suggest that the early Icelandic immigrants found and exploited breeding colonies.

There seem to be three different words for this creature in Old Norse. Rosmhvalr is an old word which survives mainly in the place-name and in legal provisions, in which it is sometimes confused with hrosshvalr. The Old English horshwæl mentioned above seems to be a calque on Old Norse hrosshvalr, which does occur in some texts, though there wasn't always a clear distinction between walruses and whales, and the Old English loan is perhaps the best evidence for this word meaning 'walrus' in Old Norse. Snorri, in his Edda (trans. Faulkes, p. 162), lists 27 different creatures which include various kinds of whales, including both hrosshvalr, which Faulkes translates as 'horse-whale' and rostungr, the more common term for walrus. The thirteenth-century Norwegian author of Konungs skuggsjá 'King's Mirror' is aware of the problem - he notes that the Greenlanders consider the rostungr to be like a whale, while he considers it more to be like a seal. And some Icelandic legal provisions also make a clear distinction between whale, which can be eaten along with fish on meat-free days, and walrus (and seal), which cannot. Rostungr is also a common nickname, and one can easily imagine the corpulent, buck-toothed or mustachioed chaps who would deserve such a nickname!
Posted by Viqueen at 5.3.13 2 comments: