In case you missed it when it was first on last autumn, the Time Team Special slightly archly named 'The Real Vikings' was shown again last Wednesday on More4, and readers in the United Kingdom therefore still have nearly four weeks to watch it again on 4oD on the web. Despite the title (note the absence of a question mark!), it is not really the last word on the Vikings. Your blogstress, dear reader, plays a very small part in the show, so had better not comment further.... But I can assure you it has some interesting stuff (including my favourite chessmen...), and at least one blogger colleague (another 'rambler'), seems to have liked it, back when it was first shown.
Posted by Viqueen at 31.7.11 1 comment:

Barrett's Back on the Brough 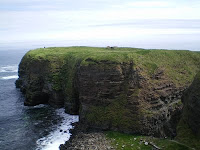 My favourite archaeological excavation, led by Dr James Barrett, on the Brough of Deerness in Orkney, has started up again, after a break in 2010. The site is still a bit mysterious and interpretations have changed, from an early Christian site, to a Viking Age chieftain's site, with the latter the current favoured one, but extending into later times when there is a Norse-period church, the remains of which can still be seen above ground (and you can just make it out in the picture).
The site now has a blog, which it is promised will be updated weekly. There, you can read about the most recent finds, including, very excitingly, a stone gaming board. Readers who know of my love for the Lewis playing-pieces (and who doesn't love them?), will know that this sets the imagination racing!
Posted by Viqueen at 6.7.11 6 comments: