I see from a BBC report that the city of Canterbury will be commemorating the Viking attacks of 1000 years ago, with services in the Cathedral (pictured), presumably to 'honour those that were killed trying to defend the city', as the city's head of culture has it.
No doubt the Vikings were 'mad, bad and dangerous to know', and committed all kinds of atrocities, although recent archaeological discoveries have shown that it didn't all go one way. Without wishing to defend any atrocities, I sometimes wish that, at this distance of 1000 years, we could be magnanimous enough to look at the evidence from both sides. Which is of course just my way of plugging the forthcoming editions, by myself and my esteemed colleague Matthew Townend, of the skaldic poems that record these events (both out next year in Skaldic Poetry of the Scandinavian Middle Ages I). Skaldic poetry is much ignored, but it is just as contemporary, and just as biased, as the Anglo-Saxon Chronicle.
Posted by Viqueen at 22.8.11 No comments:

Viking Cats and Kittens I

As the proud slave of two Siamese (one pictured left), and general lover of all moggies, I have often wondered about the Vikings and their relationship (if any) with felis catus, the domestic cat. This is a complex topic which will involve archaeology and art history, as well as texts, and I'll leave the difficult bits, as well as some of the more obvious references, to another post. In fact, I'm thinking of making this an occasional series. But today I'll start gently with two very minor, but I think illuminating, feline felicities.
The Old Norse translation of the apocryphal Gospel of Nicodemus compares Satan, crushed by the falling cross, to a mouse in a mousetrap, except that it doesn't say that, it says mús undir tréketti, literally 'mouse underneath a wooden cat'. There has been much learned discussion of whether this interpolation is native or patristic in origin, and Thor, the World Serpent, Leviathan and much else get dragged in. But who cares about all that - it's the word itself that I like, for 'wooden cat' is of course a simple kenning. Trust those Vikings to make poetry out of an everyday object.

My other reference concerns an anecdote about Sigurðr slembidjákn Magnússon, an early 12th-century king of Norway who, according to an anecdote in Morkinskinna, was spending time on a farm in Iceland (eh?), when he helps a fellow-Norwegian beat an Icelandic farmhand at a board game with the following trick (quoted from Andersson and Gade's translation, pp. 369-70):


The man who was playing with the Norwegian had a sore foot, with a toe that was swollen and oozing matter. Sigurðr sat down on a bench and drew a straw along the floor. There were kittens scampering about the floor, and he kept drawing the straw ahead of them until it got to the man's foot. Then the kittens ran up and took ahold of the foot. He jumped up with an exclamation, and the board was upset.

Really quite a pointless anecdote, as the learned translators note, but at least it shows that kitten behaviour is as it ever was. (Funny thing about sore toes, too, remember Hrafnkels saga?).

But enough serious textual analysis. If you want to laugh (or at least smile) at something even more frivolous, I suggest you google 'viking kittens led zeppelin' and enjoy the video.
Posted by Viqueen at 17.8.11 8 comments:

Tales From the Elder Days 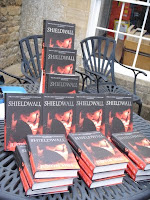 I finally got around to reading Justin Hill's Shieldwall, as previously reported. I can't say it has converted me to historical novels set in the Early Middle Ages (but that's my problem and not the author's, since there is clearly a huge market for this sort of thing). Hill loves writing about battles and politics, and that's pretty much what the book boils down to. He also has the Anglo-Saxon(ist)'s somewhat stereotypical but also ambivalent view of the Vikings:

Someone - a red-haired Dane with three fingers missing on his sword hand - thrust a beer at Godwin and Godwin took it and found himself rather enjoying this Danish way of doing things (p. 390, the occasion is a hanging...).

This doesn't of course prevent Hill from frequently using Old Norse names and stories derived from Old Norse texts in purely Anglo-Saxon contexts, not unlike the ways in which many academic Anglo-Saxonists appropriate Old Norse material when it suits them, without ever really having a broader understanding of the subject. So in many ways it is the usual early medieval mishmosh. But I can forgive Hill a lot for his exciting use of the English language. Without descending into pastiche, Hill manages a plain but highly effective style that successfully evokes the past without parodying it. You can open the book at random and find gems like


His eyes gleamed as he lifted the blade and laughed. That laughter came from long ago and it brought back a lightness and a joy that he had not felt for many winters (p. 153).

He also has a bit of a skaldic go with this 'quick poem' by Ottar the Black (though I don't think King Knut would have paid very much for just half a stanza):


Great king you grappled
On the green Sorestone fields
Bloodshedder of Swedes,
You laid waste the English (p. 293).

You can read more about the book, and about Justin Hill's recent book tour in England (including his visit to Nottingham) on his blog. 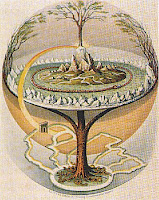 There were hints of an interest in Norse mythology already in her 1990 novel Possession. Now the distinguished novelist Dame A.S. Byatt is giving it her full attention, in Ragnarök: The End of the Gods, apparently already available as an e-book (what they?), but to be published as a real book on 1 September. In a long article in today's Guardian Review, she explains why she chose this myth when asked by publisher Canongate to contribute to their myth series. She sees it as 'a myth of destruction for our times', which shows how 'the world ends because neither the all-too-human gods, with their armies and quarrels, nor the fiery thinker [that's Loki!] know how to save it.' I particularly like the bit where she refers to her childhood experience of reading the Norse myths: 'I didn't "believe in" the Norse gods, and indeed used my sense of their world to come to the conclusion that the Christian story was another myth, the same kind of story about the nature of things, but less interesting and less exciting.' Sounds like a book to look forward to, then.
Posted by Viqueen at 6.8.11 1 comment: