Last night the northern lights, or aurora borealis, were widely visible in the UK, much further south than usual. I missed out, either because of light pollution in the city centre, or perhaps because they just weren't visible here, but many others were lucky, as even a brief glance at Twitter will show.

In 793, according to the Anglo-Saxon Chronicle, there were seen fyrene dracen on þam lyfte fleogende 'flaming dragons flying in the air' and it is very plausible that this is a description of the northern lights. As we all know, that description was followed by the notorious Viking raid on Lindisfarne. So it seems appropriate that we can see the aurora borealis here just a few days before the Vikings: Life and Legend exhibition opens at the British Museum.
Posted by Viqueen at 28.2.14 1 comment: 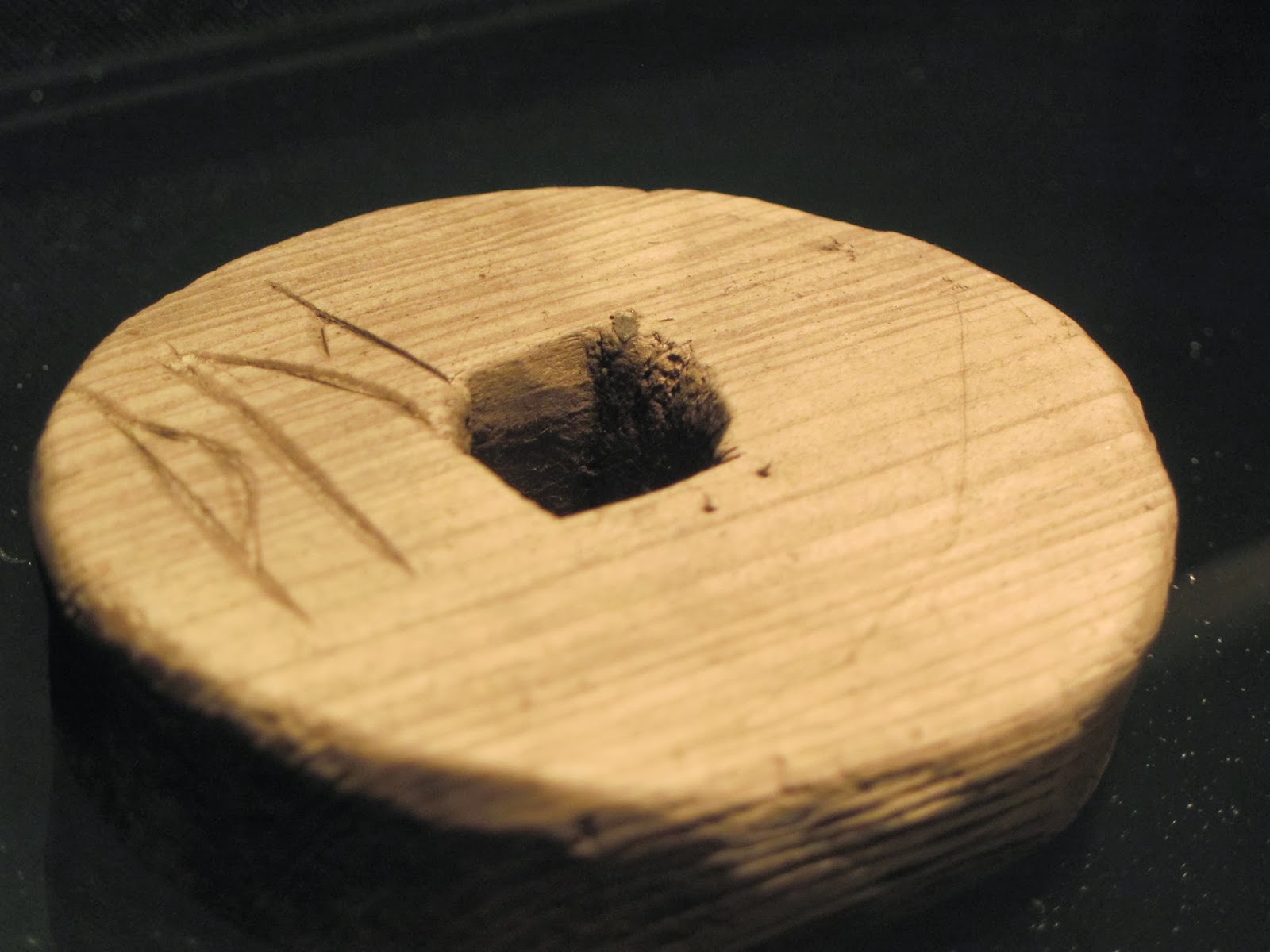 The runic message 'Think of me, I think of you! Love me, I love you' that I mentioned in the Runic Valentine blog of two years ago occurs in more or less the same form in at least three inscriptions. It therefore has an off-the-shelf quality that doesn't tell us anything about the people who might have been exchanging such messages. But other inscriptions introduce us to the real people who suffered the joys and anxieties of love.

One medieval lover in Oslo's Gamlebyen wanted no one to be in doubt as to who exactly his lady-love was:

One could spin many tales to explain why it was so important for Nikulás to mention his girl's stepmother, was she an important figure, or very rich?

Not all lovers were as true as they should have been; one piece of bone from medieval Oslo seems to be addressing two different women, in two contrasting inscriptions:

'He who carved these runes loves you, Þordís! Þóra! I can beguile (any woman).'

But, as with many such inscriptions, we can wonder how serious the sentiments were. Perhaps it was all just an after-dinner game, as the remains of the roast were passed around and people wrote jokey messages on it.
Yet another bone inscription sounds just like what you might hear in any schoolyard:

The inscription is incomplete, so we will never know the name of Ása's boyfriend. The common name Ása occurs elsewhere in inscriptions from medieval Oslo, and she or some other woman could have been responsible for carving þut 'hum' on the spindle-whorl pictured above. Let's hope her love-life was humming like her spinning.


Note on sources: these inscriptions have not been fully published yet; the texts cited above are taken, with small modifications, from the Samnordisk runtextdatabas.

It may have escaped your notice that Ragnarok will apparently take place on the 22nd of February 2014, if so, consider yourself warned! The Jorvik Viking Festival will be recreating this event, and their description cleverly plays on the ambiguity in the Old Norse sources as to whether this cataclysm is in the future, and therefore to be feared and anticipated, or has already happened in the past, so that we are now living in the brave new world that arose out of the ashes of the old one. This is all a fascinating topic to which I may return in another context.

In the meantime, I am a bit gutted that Jorvik's page on the Norse gods misses out Ullr, the god of skiing and hunting. As the Winter Olympics start, it seems appropriate to give a mention to this earliest paragon of what the Guardian today described as 'One of the more bewildering of the many perplexing disciplines to be contested in Sochi', the biathlon, which combines cross-country skiing and shooting. The case of Ullr, however, shows that this combination of skills is essential in the north. Snorri says of Ullr that hann er bogmaðr svá góðr ok skíðfœrr svá at engi má við hann keppast 'he is such a good archer and so good on skis that no one can compete with him'. Obviously a gold medal prospect then! His spiritual descendant is Earl Rögnvaldr of Orkney, also a whizz at both skiing and shooting.

Although Ullr is not so often mentioned in the mythological texts of medieval Iceland, there is plenty of evidence that he was widely venerated in the Viking Age, particularly in Norway, where place-names like Ullern and Ullevål, both in Oslo, and Ullensvang, in Hardanger, perpetuate his name. The Norwegians have won more medals at the Winter Olympics than any other nation, so may the spirit of Ullr live on in their efforts in Sochi!

But it has to be admitted that the Swedes are also pretty good at winter sports, they are 7th in the Guardian's all-time medals table. And to prove this, I offer an image above of the Böksta rune-stone (U 855) from Uppland in Sweden, which shows Ullr himself, bottom left, with both his bow and his skis.
Posted by Viqueen at 8.2.14 1 comment: