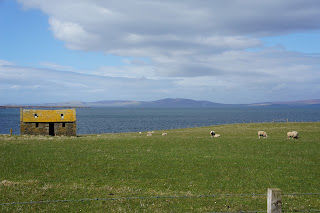 Time flies, and it's been all of three years since I was last in Orkney, so I was very happy to have the opportunity to go again last month. As so often, the excuse was an academic event, the splendid 4th St Magnus Conference, but I always manage to work in some extra time to enjoy my favourite islands. As this was my twelfth visit to Orkney, I have been around quite a lot of it, including most of the inhabited islands. But each time I discover something new, and this time I got quite excited about Hoxa on South Ronaldsay. Something for everyone there, starting with a broch (who doesn't love them?), a fascinating Norse place-name with associated saga-reference, antiquities from both world wars, and a gallery with some wonderful tapestries. So here's a little bit about all of these marvellous things. 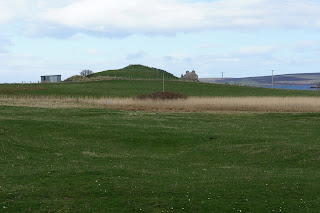 There's not much to see of the broch, as it's been mucked about with quite a lot, but its position is amazing, as with so many brochs, and as noted by the RCAHMS 'The broch, Howe of Hoxa, lies in a conspicious and commanding position on a rounded eminence, 50-60ft above the beach, at the N end of a hog-backed ridge on the broad low-lying isthmus which divides the Bay of Widewall on the S frrom the Dam of Hoxa on the N.' In the Viking Age, the broch will have appeared as a mound and this mound has given its name (Old Norse haugr) to the nearby farm, Howe, and to the isthmus on  which it is placed, Hoxa. The name of this isthmus is recorded in Orkneyinga saga as 'a Haugahæide' - the form is not very reliable as the only medieval manuscript of the saga at this point is the late, and sometimes confused, Flateyjarbók. Luckily, there is an earlier reference to it from 1329 as 'a Haugs æiðe' and by 1492 it is already being written as 'Hoxa'. The 1329 document is of great interest since it is one of the only four surviving documents written in Old Norse and issued in Kirkwall. It records a sale of lands and has contemporary forms of 10 place-names (including that of the island) 'all of which, with the exception of [one], can still be easily recognised today' (Hugh Marwick, Orkney Farm-Names, 1952, p. 169). 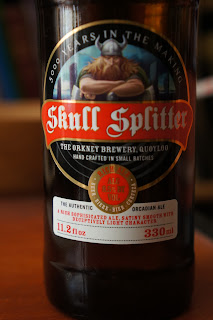 The saga-reference to Hoxa is equally interesting, as it claims (Orkneyinga saga, ch. 8) that Thorfinn Skull-Splitter (Þorfinnr hausakljúfr) died of illness and was heygðr 'laid in a haugr' í Rögnvaldsey á Haugaeiði as Finnbogi Guðmundsson's edition of 1965 has it. There are examples of Viking Age burials in brochs, at Gurness for example, so this is not implausible. Or it could just be an example of an aetiological tale, a story explaining the origins of something, derived from an understanding of the place-name. We don't know much about this particular Thorfinn, or why he got his nickname, though the saga does tell us that the daughter of Eirik Bloodaxe and Queen Gunnhild was married to his son Arnfinnr and that Thorfinn got to be Earl of Orkney because his two brothers had died with Eirik Bloodaxe in England. Thorfinn was höfðingi mikill ok herskár 'a great chieftain and warlike' - I suppose they had to add the last bit to counter the fact that he died on his sickbed. His nickname was also borrowed for the strong ale (Alc 8.5% b.v.) produced by the Orkney Brewery. 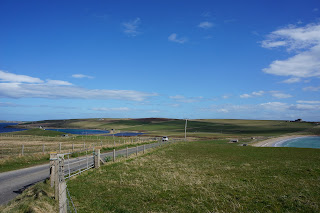 The broch-mound does indeed dominate the isthmus though the latter is very hard to photograph, as you can see from my attempt. And why does English not have a better word than the unpronounceable 'isthmus'? 'Neck' doesn't sound quite right....Also, do ignore the Hermann Pálsson/Paul Edwards Penguin translation of Orkneyinga saga which claims that Thorfinn 'was laid in a burial mound at Hoxa in North Ronaldsay' - they had clearly confused the two present-day Ronaldsays, although the names are clearly distinct in the saga (what is now North Ronaldsay was originally Rínansey and this is the form used in the saga). A. B. Taylor managed to get it right in his 1938 translation. 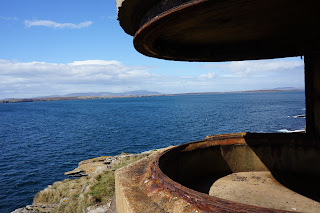 Another interesting place-name nearby, in fact just a bit off to the right of the picture of the isthmus above, is Roeberry, which I argued (Ships and Men in the Late Viking Age 2001, 78) was the Rauðabjörg where a later Earl Thorfinn defeats his kinsman and rival Rögnvaldr Brúsason in a sea-battle. The significance of this part of Orkney for military strategy is underlined by the twentieth-century antiquities out on Hoxa Head, gun batteries from both the First and Second World Wars. The site is quite amazing to walk around, especially for the views on a day as gorgeous when I was there. 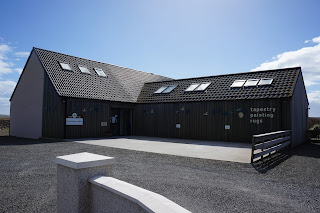 Last stop before the war relics is the Hoxa Tapestry Gallery. I learned about this through my mother, who is very interested in weaving and textiles generally, so dropped in for a visit. The tapestries are amazing, all of them, and Leila Thomson frequently makes use of both the local landscape and its historical associations. Although the isthmus is difficult to photograph, as I noted above, she can imagine it, and has, in a tapestry called Haugsaith: between two shores which also has some not bad runes on it. There is so much of interest at Hoxa and with the fabulous weather it was certainly a most successful excursion.