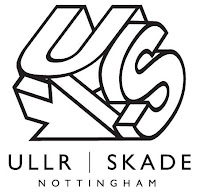 Admittedly, their grasp of the etymologies and spellings of their patron deities, of runes, and of Norse myth generally, is a wee bit wonky, but hey, they're fashion designers, not Old Norse specialists. But next time, guys, give your friendly local Viking specialists at the Centre for the Study of the Viking Age a call! In the meantime, I do hope business goes well for them.
Posted by Viqueen at 30.8.15 No comments: