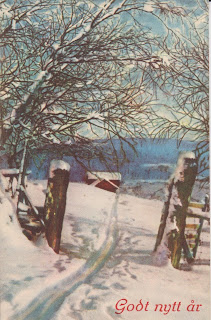 What with the weather wet and temperatures into double figures, we won't be doing winter sports here in Britain, that's for sure. This time of year always brings back happy memories of snowy times in Norway. Being a bit of a retromaniac in many things, I have a small collection of old-fashioned seasonal greetings cards. Not sure about the date of this one, probably early 1960s? Anyway, I append it here by way of seasonal greetings to all my loyal readers!

Thinking of Norwegian winters reminds me there was an article in the Guardian a week or so ago, on that most excellent means of locomotion, the 'sparkstøtting', or 'spark' for short. Apparently, the official English term is 'kicksled(ge)', though that's the first time I've heard it. I've seen a lot of them in Norway, and I suppose they must be used in other Scandinavian countries, as suggested by the 1890 Swedish drawing below, but I've never seen them anywhere else. But then where else has enough snow? I wonder if they were ever exported to Minnesota?

The Viking Age hoards that keep being discovered in northern, especially north-western, England, are coming in so thick and fast in recent years that I can't be bother to log every one in this blog. But I thought I'd give a quick mention to the latest, found at Silverdale in north Lancashire, and reported today in the Guardian and on the BBC in connection with the publication of the annual reports for treasure and portable antiquities (though found in September). The PAS website also has a detailed article on the hoard.

I find this one particularly interesting because there is one previously unknown coin type in it (pictured above), apparently issued by an unknown king called AIRDECONUT. The jury is still out on whether or not this really represents the name 'Harthacnut', as currently suggested, but it will keep numismatists and onomasts happy for some time to come. In case you were wondering, the date of the hoard (c. 900-910) precludes that well-known Harthacnut, son of Cnut.
Posted by Viqueen at 15.12.11 No comments: