The Islands to the South 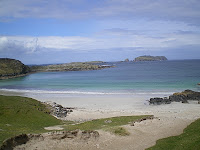 The current bureaucratic, Scotocentric appellation for them is 'The Western Isles', while the more geographical, but still mainland-focused term is 'The Inner/Outer Hebrides', but I prefer the Old Norse term Suðreyjar, the Islands to the South. It all depends on your point of view, of course! In Gaelic they are the Innse Gall, the 'Islands of the Foreigners', i.e. the Vikings, I suppose. What other part of Britain has so many names? As the Norwegians say, 'kjært barn har mange navn', or 'a beloved child has many names'. But I couldn't claim to love the Hebrides until now, never having been there - they were one of the most obvious gaps in my gradually-being-ticked-off list of visited Viking-places. Now, at last, that lack has been remedied - your blogstress, dear reader, has just come back (a little later than expected, courtesy of that Icelandic ash-cloud, again) from a short but amazing break on the island of Lewis and Harris. 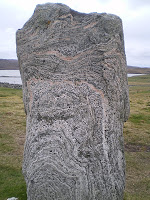 Even in only five days, I saw far too much to tell you about at length here. Suffice to say I was fair smitten! Three things stand out for me, though: (a) the stone circles and standing stones, (b) the sandy beaches and (c) the Norse place-names. The stones are amazing enough as arrangements, in themselves and in relation to other stones in what archaeologists like to call 'the ritual landscape'. But what distinguishes Callanish from, say, Stonehenge is not only the much smaller number of tourists visiting, but in particular the beauty of the stones themselves. They were clearly chosen for their amazing shapes and patterns (showing up nicely in the Lewisian gneiss), and every one is different, even in the same stone setting (see the picture, left, of one from Callanish).
As to the sandy beaches, they are every bit as lovely as they have appeared in all the photographs I have previously seen: golden sands, turquoise sea, mountains on the horizon, and hardly anyone else in sight. The guidebooks go on about the beaches of South Harris, which are indeed lovely, but my two favourite ones are in Lewis, Bostadh on Great Bernera (pictured above), which has great views of some offshore islands, and Tolsta on the north-east coast, which is particularly sandy. 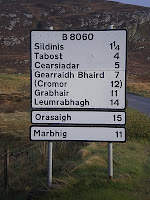 The Norse place-names are sometimes hard to recognise for Gaelicless people like me, though you only need a smattering of linguistic nous to decode the elements -bost as -bólstaðr and -siadar as -setr or -sætr, or indeed Uig as -vík and -bhagh as -vágr. I've been mugging up some of the articles by Magne Oftedal and Ian Fraser, both of whom suggest that the majority of not only village-names, but place-names in general, in Lewis are of Norse origin. You will find plenty of Norse place-names throughout the Hebrides, but they are really thick on the ground here. It's also clear from what I've read so far that there is still a huge amount of work to be done there on these place-names, so if there are any aspiring PhD students out there, my advice is to go away, learn both Old Norse and Gaelic, and get to work! 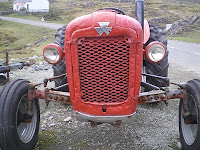 Among the many photographs I took, an awful lot were of other small obsessions of mine, sheep, cows, post offices and tractors. Here is one of the many lovely little red Massey Fergusons still in use in Lewis. As to the post offices, there seemed to be more of those in Lewis than there are left here in Nottingham, after the most recent cull. All of them are small and multifunctional, but they clearly play an important role in the community.
A final word of recommendation, St Clement's Church in Rodel (Roghadal), South Harris has a fascinating range of sculpture, from an over-the-top sepulchre for Alexander MacLeod, who built the church, to a lovely simple crucifixion, and a tower decorated with both a bishop and two sheela-na-gigs. Now what was that about?

...looks just like we expect him to look, see this picture from Blockbuster Buzz - Times Online - WBLG: Thor revealed!. But where are the goats?
Posted by Viqueen at 2.5.10 1 comment: