The Mega Viking Show has finally come to town, and your faithful blogstress was honoured and privileged to be present when Margrethe, Queen of Denmark, and various other dignitaries opened it last Thursday, as well as to get an early viewing of the whole thing. I don't propose to review the exhibition - there are plenty of reactions of all types to be read in the media. The exhibition is designed for the general public, rather than the expert, and I firmly believe that the outsider's view is the one to seek out. Interestingly, the reactions vary enormously - do read more than one review to get a sense of it all. Another reason I would find it hard to review is that so many of the objects are almost too familiar. This is not only because I saw a version of the same exhibition in Copenhagen last September, but also because some of them I saw last time the British Museum did a Viking exhibition, in 1980, and in other exhibitions in various places since. Yet others are familiar from the many illustrated coffee-table books about the Vikings that flood the market on a regular basis.

But some of the exhibits are relatively new and I thought I'd pick out a few of my favourites at random, for my and your delectation. My top favourite is probably the valkyrie figure discovered in 2012, but I have blogged about that before. Several other 'valkyrie' images can be seen in the exhibition, and they are a fascinating group, mostly relatively recent metal detectorist discoveries. Another recent (2007) metal detectorist find from Denmark of which I am inordinately fond is the ship-brooch pictured above and extensively used by the British Museum in its publicity for the exhibition. It is sometimes said to represent a dragon-ship, but it is quite clear to me that the two figureheads are those of horses, as indicated by their ears and manes. Although similar brooches are known, this is the only one I have come across on which the animals seem very definitely to be horses' heads, and is thus a unique representation of that figure so commonly found in skaldic poetry, by which ships are called 'horses of the sea'. I also like the little face between the horses' heads, though quite what he represents I do not know.

Oval brooches have always fascinated me because they are typical of Scandinavian women's dress, and when we find them around the world, they raise interesting questions about the role of women in Viking migrations. Many thousands of them are known, from a broad geographical and chronological range, and in a variety of styles. For me, the one that tops them all is definitely that found in 2004 in an archaeological investigation at Finglas, in Dublin. There's an interesting photo of how it looked when it first came out of the ground on the website of Icon Archaeology, but it can only truly be appreciated in its cleaned-up form, which shows very clearly its 'protruding animal ornament', as the archaeologists say. These include both whole animal figures, and animal heads, all of which strongly resemble bears. Although similar brooches with small animal figures are known, I think these are the only ones which are clearly bears. They look quite cute to us today, though the bear was of course a feared and fearsome animal, and widely significant in Viking language and culture. I haven't found a good photo of the brooch to show you, but it adorns the cover of The Viking Age: Ireland and the West (2010), edited by John Sheehan and Donnchadh Ó Corráin, shown above, and is discussed at length by Maeve Sikora in that volume. 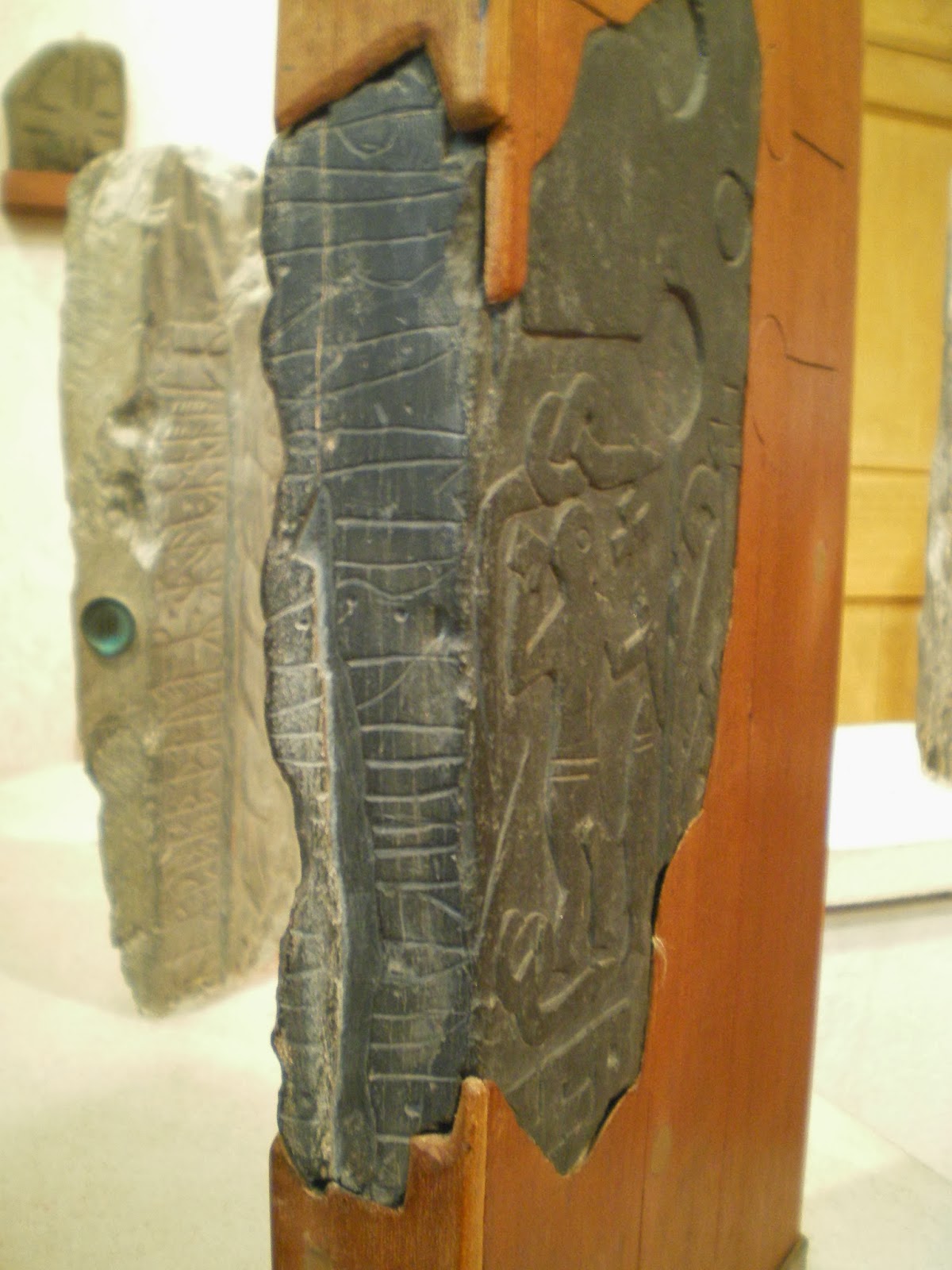 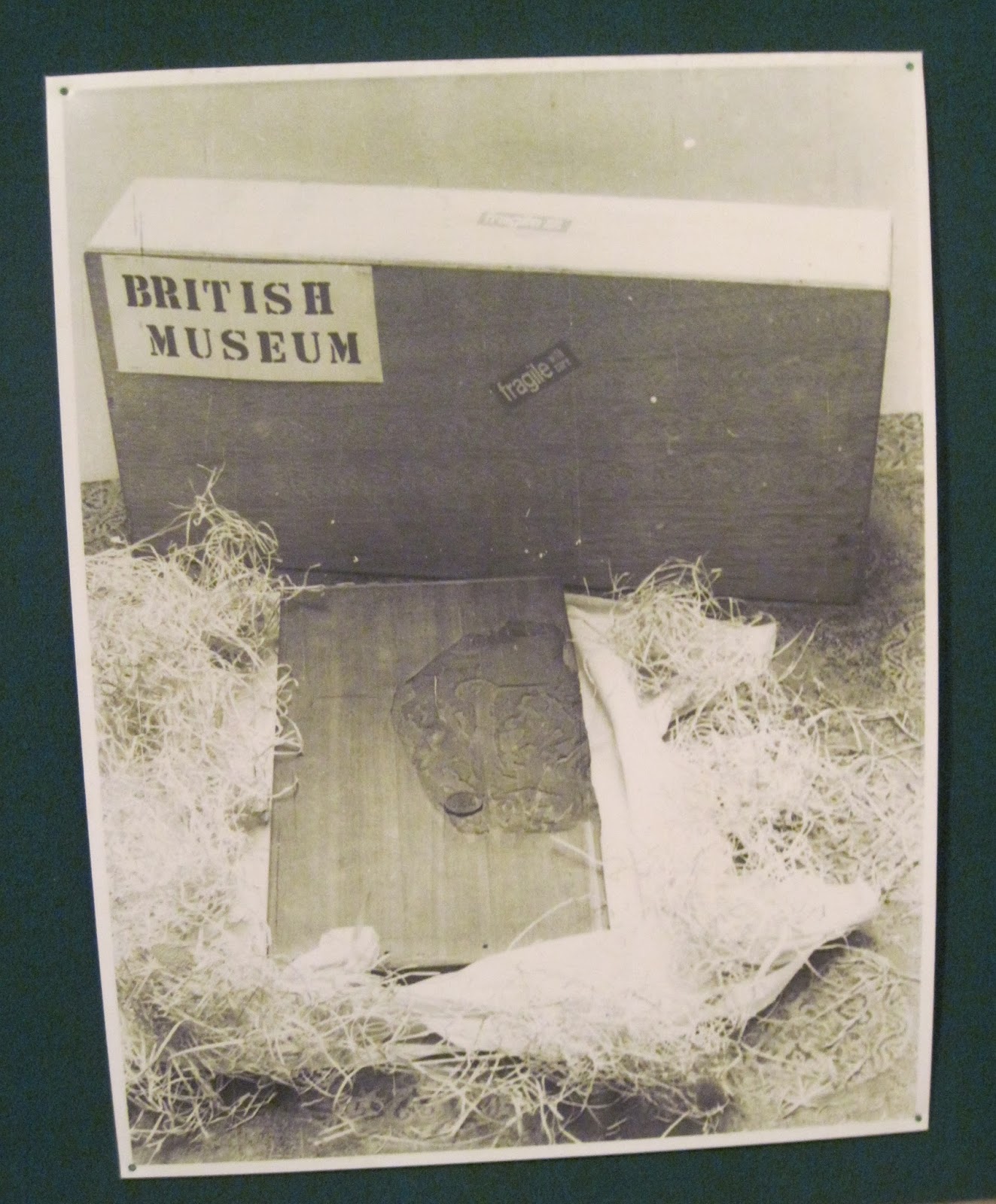 Finally, although the exhibition is not strong on runic inscriptions, it was a real pleasure to see the Kirk Andreas III stone from the Isle of Man, with its simple (and incomplete) inscription 'Þorvaldr raised this cross'. While not the most exciting inscription, it is of interest because, along with most of its fellow Manx inscriptions, it records the earliest uses of the word kross in Old Norse, a word with a fascinating history which appears to be borrowed from Latin crux into Gaelic, from there into Old Norse (as suggested by the Manx inscriptions) and from there into English, as suggested by some place-names in the north-west of England. Oh, and the stone, which is clearly a Christian cross-slab, also has those well-known images of what appear to be Odin at Ragnarok on one side, and a Christian figure on the other (above, left). It was particularly nice to see it in London last Thursday, because on Friday I went off on another runological field trip to the Isle of Man, where we had to make do with a replica in St Andrew's church, Andreas, instead. But the display in the church did have a nice picture of the last time the stone went to the British Museum, for the 1980 exhibition (above, right).