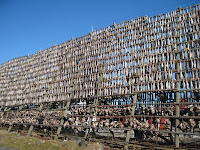 A recent ramble took me further north than I had ever been before, to the Lofoten Islands. We were staying at the splendid Nyvågar Rorbuhotell on Austvågøy, at more than 68° N (even Iceland only just scrapes 66° N by virtue of the offshore island of Grímsey). Obviously the seminar included the obligatory excursion to the fabulous site of Borg on Vestvågøy, where we enjoyed the exhibition and indulged our inner Vikings with mead and a nice thick lamb soup inside the reconstructed chieftain's hall.

Many other beautiful sights were seen, the weather was kind (except for the day we were supposed to have a boat trip into Trollfjorden, which caused some real disappointment) and interesting discussions were had. But what particularly piqued my curiosity was all the stockfish drying (see picture above), and my realisation that the very district of Vågan where we were staying is quite widely mentioned in Old Norse texts, where it is known as Vágar ('Bays').

Accounts of the renowned battle of Hjǫrungavágr (c. 985) mention that one of the supporters of Hákon jarl was a chieftain called Þórir hjǫrtr (‘Hart’) from Vágar. Hákon was a noted pagan, and his followers were too, and when Hákon had been killed and Norway was ruled by the Christian missionary king Óláfr Tryggvason, Þórir reappeared as one of the northern chieftains who attempted to resist Óláfr’s Christian mission and political ambitions, though they were ultimately unsuccessful and Þórir was killed by Óláfr. 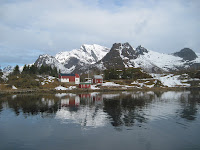 The religious history of the region is then obscure until over a century later when the Norwegian king Eysteinn Magnússon (d. 1122) is said to have built many churches in different parts of Norway, including one at Vágar. The fact that he bothered suggests the importance of the place already then, if not before. The same king was also responsible for revising the laws  regulating the economic activities, including fishing and the fur trade, of the people of Hálogaland. The enactment mentions that ‘every man who catches fish in Vágar’ must give five fishes to the king. A  royal order of 1384 names Vágar as one of the three most important trading centres of western and northern Norway, alongside Bergen and Trondheim. 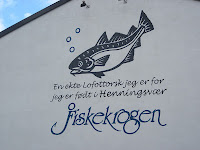 The importance of this district as fishing station and trading centre resonates through several sagas of Icelanders, where it is presented as having had that status already in the ninth and tenth centuries, including Egils saga, Hallfreðar saga and Grettis saga. The question is whether this represents what Icelanders thought of Vágar in the thirteenth and fourteenth centuries, or whether the stockfish trade could have been older. I will discuss this question at greater length in something I am working on at the moment, so watch this space!

There is also a glimpse of Vágar in Konungs skuggsjá (‘The King’s Mirror’), an instructional text for ambitious young men by a thirteenth-century Norwegian, for whom Vágar is characterised not by paganism or by fishing but by its latitude. To this up-to-date and scientifically-minded observer, instructing the future seafarer, Vágar is the land of midday stars in winter and the midnight sun in summer. In early May, when I was there, it was a bit too early for the midnight sun, but it certainly did not get completely dark at night and sleep was difficult. But who could sleep in such a beautiful place?
Posted by Viqueen at 19.5.13 1 comment: