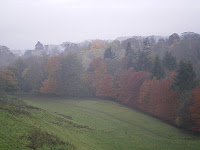 Dear readers, as there are more and more of you (33 followers at last count, and who knows how many undeclared), I feel more and more guilty about not keeping up with the blog. No excuses will be offered, except to note that your blogstress has been Norse and Vikingly rambling quite a lot recently. At the end of October, the annual trip to Cumbria with the MA students took place, as fabulous as every year, with a special mention to Burnthwaite B&B for their hospitality, and the kind vicars and rectors who welcomed us at Pennington, Irton, Gosforth, Bridekirk, Aspatria, Lowther and many other places with beautiful and inspiring churches, fascinating sculpture ('is it really the real thing from the 10th century?' asks an American student; how wonderful to be able to say YES!), amazing views and the occasional tidbit that makes the visit special (the little wooden Gosforth cross inside the church, the moving memorial to the foot and mouth crisis at Bridekirk, Calverley's grave at Aspatria, the dusky beauty of Lowther). This year was particularly special, as the autumn foliage reached levels and intensities of colour that were almost North American (see the photo, above, from Lowther in the gloaming, a scene entirely appropriate to one's mood at this time of year). Since the trip, I have been reliving the local glories by finally getting around to reading Matt Townend's The Vikings and Victorian Lakeland that I mentioned in last year's post-Cumbrian blog, but have only just found the time to read. 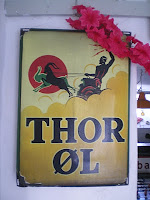 No sooner was I back from Vatnsland than I was off to Árós, for an excellent PhD course in Viking Studies, accompanied by two of Nottingham's stalwart higher-level Viking Studiers. As well as deep intellectual discussions, we tried to imagine life in a smoky Viking house, and wondered why people might carve rude runes on church walls... But the best bit really was the canteen at Moesgård, with its fabulous collection of (illicitly acquired? surely not...) signs (see photo, above right). 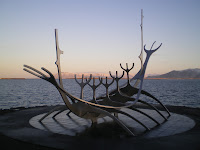 Hardly had I recovered from the Jutlandic experience when it was off to Iceland to ponder what happened to gods and goddesses when they were on, or crossed, the 'edge'. Liminality, in other words. Another excellent conference, well-organised. But the high spot for me was on my last morning. I had eschewed the crack of dawn flight in favour of a later one which would get me home to Nottingham at nearly the crack of dawn the following morning, but at least gave me a few hours to enjoy being in Iceland. And lo, the icy winds that feel like knives being thrown at you (like the poor girl with the axes in the Kirk Douglas film, but not hitting only your plaits) abated, the sun came out (though the temperature remained low), the snow sparkled on Esja, and Tjörnin was frozen over. So much so that people were skating on it, apparently without a Health-and-Safety care in the world. I also paid my respects to Jón Gunnar Árnason's Sólfar, just starting to glint in the sun (see above). Wow.
All of this reminded me of why I love Norse and Viking rambling. But doing it in less than three weeks takes its toll... I am still recovering, dear reader, but hope to be back soon.