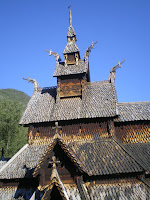 Before we completely let go of the Christmas season and turn our thoughts to the New Year, I thought I'd mention a few runic inscriptions where the festive season makes an appearance. The harvest of examples is not as rich or varied as in skaldic verse (as discussed in my previous post), but still has its interest. In addition to the splendid depiction of the Nativity on the Dynna rune-stone from Norway, pictured in that previous post, there are I think only two references to jól in the inscriptions themselves, neither of them especially Christmassy!

Both are graffiti from the walls of Norwegian stave churches, both are probably from the twelfth century, and both state that they were carved on the Sunday after Christmas (the texts below are taken from the Scandinavian runic database, with some necessary modifications). One is from Borgund, in Sogn og Fjordane (pictured), everyone's favourite stave church, and the most 'runic' of all the runic stave churches, and this one says:

The other inscription is from the church in Atrå, in Telemark, and it has a very similar message:

One can only speculate why Klemetr and Þorsteinn felt the need to write these banal statements on the walls of what was presumably their local church. Were they just bored? Were they suffering the after-effects of Christmas eating and drinking? We don't know where the plank with Þorsteinn's runes was originally placed in the church, but Klemetr's graffito is in the covered walkway that surrounds the church, so perhaps he was just waiting to go in, or hanging about after church while his wife indulged in gossip with the neighbours. As Annette Jones once wrote, 'Before or after services was a likely time for people to have written runes'.

At least Klemetr followed his signature with a prayer, and that is in line with most stave church graffiti, which tend to the pious. One of his s-runes has a little cross on it, making it look a bit like the IHS monogram (rune 22 in the drawing below, taken from volume 4 of Norges innskrifter med de yngre runer 1957):

Þorsteinn, on the other hand, not only didn't have much to say apart from documenting his vandalism, but also struggled a bit with his orthography. More interesting than his banalities is his by-name, which means 'wound-spear' and was perhaps intended to suggest his warlike nature. Or perhaps it was just a joke, as so many by- and nicknames were. Although bengeirr is not recorded elsewhere as a byname, it does occur once as a given name for one of the followers of King Sverrir, a man called Bengeirr langi 'the tall'. Since the name is so rare, Magnus Olsen speculated (in volume 2 of Norges innskrifter med de yngre runer) that our runic Þorsteinn bengeirr was the father of Bengeirr langi, since it was not unknown for the father's byname to become the given name of his son or a later descendant.

The pious, the mundane, the violent and family feeling, it's all there in runic inscriptions....

Christmas is traditionally a time for overindulging in food and drink, and things were no different a thousand years ago. The Old Norse word jól can refer either to the midwinter feast of pre-Christian times, or to the Christian celebration of the Nativity, as depicted on the 11th-century rune-stone from Dynna, in Norway (left). Both festivals involved extensive feasting. In the mid-12th century, the crusader and poet Earl Rögnvaldr of Orkney remembered the Christmas feasts he and his best friend used to organise together in their youth (all texts and translations below are taken from vol. 1, ed. Diana Whaley 2013, and vol. 2, ed. Kari Ellen Gade 2009, of Skaldic Poetry of the Scandinavian Middle Ages):

Here the poet draws an explicit comparison between the peaceful joyous feasting of Christmas back home in Norway, and the Christmas he is spending equally joyously attacking a castle in Galicia, on his way to the Holy Land. In the next stanza, he refers to making 'the eagle replete again'. Being largely a military genre, skaldic poetry often figures Christmas as a feast for the beasts of battle (carrion-eaters the raven, the eagle and the wolf), with the underlying image a comparison with the more peaceful feasting the warriors themselves indulged in at Christmastime. In this rather baroque imagining by a poet called Grani the beasts of battle's Christmas feast also includes their family and children, as indeed do Christmas feasts for humans:


The lord gave the brood of eagles Danish blood to drink; I believe the ruler prepared a yule-feast {for the retinue of Huginn

That was King Haraldr harðráði 'Hard-Ruler' bashing the Danes in the mid-11th century. But skaldic Christmas is also a time for reflection and remembering those we have lost during the year, as the newspapers do today. In this stanza by Sigvatr, even as he is drinking he remembers, and is saddened by, how his lord and patron, King (later Saint) Óláfr was treacherously responsible for the death of his friend, the powerful Norwegian chieftain Erlingr Skjalgsson: