From Another Place I Take My Name 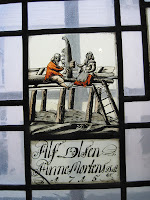 Once upon a time, when I was an undergraduate, I met a fellow student who rejoiced in the glorious name of Kjartan Poskitt. Kjartan pronounced 'Ka-djartan', by the way, rather than 'Kyartan' (excuse my phonetics). I remember coming fresh from an Old Norse class and somewhat disingenuously asking him where he got his name from; his reply was that his mother had been reading 'some old book' when he was born, and he seemed to know no more about it, and I don't think I enlightened him. I see now that he is a successful author for children (there can only be one of him, surely), and have no doubt whatsoever that his fine name, however pronounced, has contributed to that success.

Why have I suddenly thought of him again after all these years? Well, I read in yesterday's Observer that no. 2 among the top 5 currently popular names for girls is Freya. Now I've been aware that Freya is quite popular, as I know a few myself, and often ask students if they know someone of that name, and many of them do. Most of these though are lasses in their late teens or twenties, so it's interesting that the name has continued to climb the popularity ladder. Of course it has always been around - the bestselling author Freya North is a wee bit older than 30, I believe, and of course there was the redoubtable Dame Freya Stark, explorer and author, who was born in 1893 and lived to be 100. Doubtless they were all named after the Norse goddess Freyja, quite frequently mentioned in this blog, though occasionally I have asked bearers of the name where their name came from and they professed not to know (a sure sign that the name has been fully adopted into the anthroponymicon).

Are Norse names becoming more popular in this country? Orkney and Shetland have had their fair share of Thorfinns, Erlends, Sigurds and Magnuses in the last century or so, the phenomenon interestingly manifesting itself mainly in boys' names. Also, the Victorian fascination with all things Norse and Viking has lived on until the present day and spawned the occasional outlandish name elsewhere in the country, viz. Mr Poskitt, but I do wonder if the trend is increasing? If so, it is quite the opposite in the Scandinavian countries. Statistics of the most popular baby names there show that none of the top names is actually a Scandinavian name, instead they prefer international, often anglicised, names such as Emma and Victor (Denmark), Eva and Lukas (the Faroes), Emelía/Emilía and Aron (Iceland), Nora and Lucas (Norway), and Alice and William (Sweden) (I've taken this information from a splendid Wiki called Nordic Names, by the way, well worth a browse if you are interested).

The history of personal names in Scandinavia has always been very interesting. Many 'pagan' Norse names survived the conversion and lived alongside the Europe-wide 'Christian' names, some of them in continuous use until the present day, often in much changed form. Nationalist movements, e.g. in nineteenth-century Norway, led to a revival of the Old Norse names, which have been pretty popular throughout the twentieth century, too. But new names always creep in. I remember when I lived in Norway in the 1980s and some friends of mine had a baby they called Carina, I was both horrified that they were naming her after a Japanese car, but also reassured that this was really just an updated version of that very popular Scandinavian name Karin (made exotic with that 'c'), ultimately of course from the international name Katherine (and all its variants). In fact, names can often be hard to pin down to a particular language or culture, and often develop peculiar local forms even when originally imported. Thus, we mustn't forget that Kjartan is a Scandinavianisation of a name that was originally Irish. Imported names have a habit of becoming acclimatised (cf. Freya, above) and have curiously different distributions - just compare the top names in the Scandinavian countries cited above - all 'foreign' names, but different ones in each country. I know that my own given name is much more common in the country in which I was born than in any other country with which I am familiar, even though it is an 'international' name with biblical origins.

A little bit of crowd-sourcing here, just for fun: if you are not Scandinavian, but have a name that is linguistically of Scandinavian origin, I'd be interested to hear why you were given that name!
Posted by Viqueen at 24.6.13 No comments: