That wonderful compendium of the informative and the bizarre, the Guardian's 'Notes and Queries' section, today raised the curious question 'Why didn't the Vikings learn to fly?', in view of their undoubted skills in the sailing department. While it's true that they didn't actually come up with 'sail planes or hang gliders', the Vikings certainly spent a lot of time imagining flight, and indeed imagining the devices that might make it possible - their mythology is full of flight.
Freyja's feather suit (fjaðrhamr), is mentioned in Þrymskviða as a device which is borrowed by Loki in order to search among the giants for Thor's missing hammer. A similar falcon suit (valshamr), also owned by Freyja, is mentioned by Snorri in his Edda. This time Loki (again) is searching for the goddess Idunn of the golden apples, who has been abducted by the giant Thjassi. But things get complicated, because Thjassi, too, has his own flying suit, this time in the form of an eagle (arnarhamr).
Similarly, the maidens at the beginning of Völundarkviða flew in from the south wearing swan-feathers (svanfjaðrar). Later in the poem, Völundr himself rises into the air using something called fitjar, perhaps best imagined as flippers of some sort. He is however not really flying, just trying to raise himself up after the evil King Nidud had hamstrung him.
Others, too, have wanted the sailing Vikings to fly. A wonderful children's book, The Ship that Flew, by Nottingham author Hilda Lewis (1939), derives its central conceit from the god Freyr's magic ship Skidbladnir. According to Snorri's account, this ship can accommodate all the Æsir fully armed, and immediately raise a wind whenever the sail is hoisted, but can also be folded up into one's pocket when not required. In Snorri, the ship only sails, but Hilda Lewis imagined it flying and taking the children of her book on all sorts of magical adventures. I vaguely remember a TV adaptation of this some 15 or 20 years ago (has anyone got the details?) which rather boringly turned the central conveyance into a flying carpet, so much so that the story was hardly recognisable, yet I am sure it was the same story.
Posted by Viqueen at 19.1.11 8 comments: 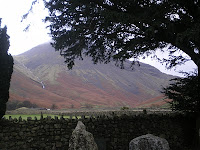 In a philosophical mood today, and reflecting, as I often do, why these Norse and Viking Ramblings are so important to me. Many wonder why I like cold and windswept places rather than the olive groves of, say Crete - not that I don't like those, quite the opposite, I love them. But warm and soft places just don't inspire me. So I'm really pleased to see some of my favourite places mentioned in today's Guardian, in a feature  in which the great and the good (professors, librarians, artists, authors) write about their 'Inspiring Views'. Greenland, North Yorkshire (Ribblehead), the Outer Hebrides (Harris) and the Lake District (Wasdale) all get a mention. Greenland is certainly much in the media these days, what with Stephen Leonard's reports from there in the Guardian, and Bruce Parry's BBC programmes on the Arctic, and I've noticed it's lately become a very popular topic with PhD students in Norse and Viking Studies. Greenland is certainly majestic, awesome and endlessly fascinating. But the wild, but quieter, places are perhaps the ones that really inspire, me at least. As Robert Rowland Smith says of Wasdale, 'there's the Viking church reminding you that you might at some point need mercy from all those towering forces gathered round'. Quite so. He's a philosopher, too, so perhaps excused not realising it isn't really a Viking church.
Posted by Viqueen at 15.1.11 No comments:

There's a lot of Thor to look forward to in the coming year. Firstly, what today's Observer calls 'Kenneth Branagh's unlikely first foray into Marvel comic book heroics', the film Thor, due in May (and already much hyped, see my previous posts on this topic from April and May last year), or possibly even the 29th of April (will people be queuing for the film to get away from the Royal Wedding?). Never having been a reader of Marvel comics (is this something to do with my gender?), I'm not quite sure what to expect, and whether the film will just be a version of the comic, or whether it will have recourse to older sources. But the recent publicity suggests this is one that will be more for comic fans than Old Norse mythology fans.
What actually looks like much more fun is Legends of Valhalla: Thor, an animated film being produced in Iceland (based on some Icelandic children's books) and to be released in the autumn. The film has a cool website, where among other delights you can see interviews with the splendid Terry Gunnell, explaining about Norse mythology (though I rather wish they hadn't used the term 'Asatru' for this).
Posted by Viqueen at 2.1.11 1 comment: