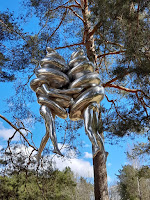 My favourite sculpture though was Sean Henry's 'Walking Woman', slightly larger than life, and confidently striding along the footpath as her slightly smaller real-life counterparts were doing around her.
From the Stone Age to the twenty-first century, with glorious views and a wonderful place for a walk, there is certainly something for everyone here. If you are ever in Oslo at a loose end, I highly recommend jumping on the no. 19 tram to Ekebergparken and checking it all out.
'On Oak Hill II' to follow in due course ...
Posted by Viqueen at 24.4.22 No comments: 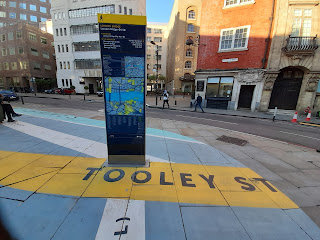 On academic business in London the other day, I chanced upon Tooley Street, just near London Bridge Underground station. Now, I've known about Tooley Street for a long time, but never actually visited it, which was clearly remiss of me, as you will understand below.

Tooley Street takes its name from St Óláfr of Norway, or rather from a church dedicated to that saint, as explained by Bruce Dickins in a classic article in Saga-Book in 1940 (pp. 67-68). As Dickins shows, there are quite a few churches dedicated to the saint in London, but this one is special, since its site is very close to one of Óláfr's youthful exploits, as recorded in the poem Víkingarvísur by the king's Icelandic poet Sigvatr Þórðarson, and edited by yours truly some years ago. 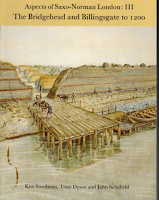 The poem recounts, in a numbered list of battles, the future king's youthful adventures in England and across the European continent.  Stanza 6 is as follows:

It is correct that the sixth battle [took place] where Óláfr attacked the wharves of London; the valiant prince offered the English {the strife of Yggr <= Óðinn>} [BATTLE]. Frankish swords bit, and vikings defended the ditch there; some of the troop had huts in level Southwark.

It is of interest that stanza 6 mentions two specific place-names, giving the location of the battle, firstly Southwark and then the bryggjur of London. I have argued that this does not refer to London's bridge(s), as one might think, but to the wharves of London (as depicted on the cover of the book pictured above; follow the link above to read more about this question, there are also some comments there on the name Súðvirki and on the possible meanings of the word víkingar in this context). 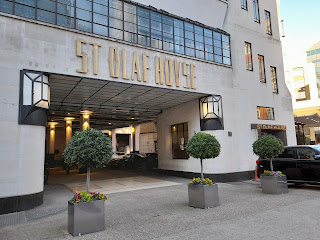 But getting back to Tooley Street, imagine my delight to discover that one part of London Bridge Hospital is the unbelievably splendid (and grade II* listed) St Olaf House. This was built on the site of the old church, which stood until 1737, then was rebuilt and eventually demolished in 1928 to be replaced by this amazing edifice in 1932. It was originally built for the Hay's Wharf Company and became a part of the hospital in the 1980s. It's a lovely example of Art Deco, with lots of gorgeous details and quite a splendid entrance. I'm surprised it hasn't appeared in one of the Poirot episodes (or perhaps it has?). 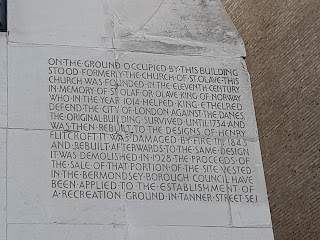 An inscription on the corner of the building gives a brief history of the site and mentions Óláfr's military activities in the vicinity. However the exact history of all this is difficult to determine. Back in 2013 I wrote: 'Although Óláfr appears to have fought for the English King Aðalráðr (Æthelred) after the death of Sveinn tjúguskegg ‘Fork-beard’ in 1014, Snorri’s claim that Óláfr’s earlier battles were fought in support of him ... is probably erroneous ... His earlier English campaigns seem rather to have been fought alongside Þorkell inn hávi and the Danes ..., and it appears that Óláfr ‘like his friend Þorkell, changed sides and became a supporter of Æthelred’ (A. Campbell 1971, 12). The skaldic stanzas do not in themselves clarify who Óláfr’s allies and opponents were, nor exactly where and when he fought; even when they are considered in conjunction with the English and Norse prose sources much remains uncertain ...' And it goes without saying that the idea that Óláfr’s exploits are commemorated in the nursery rhyme 'London Bridge is falling down' is most likely fanciful. 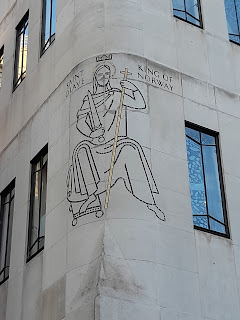 The other corner of the building depicts the royal saint in all his regal majesty, rather than as a young attacker (or possibly defender - the stanza is a bit ambiguous) of a muddy ditch. It is this subsequent saintly and regal figure, rather than the youthful warrior on his gap year abroad, that is commemorated in this very fine building. I'm glad to have discovered it for myself and can recommend it as a must visit for anyone who loves both Art Deco and royal Viking saints.... 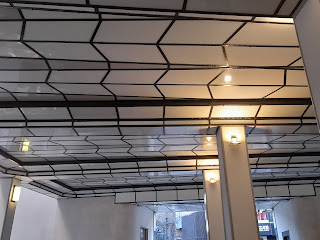