The work of the Kirkwall draper, conchologist and poet Robert Rendall (1898-1967) may not be to everyone's taste - the poetry is traditional in style and often about God. But he really has a way with words, in my view, and it's nice to see that there is now an edition of his Collected Poems (ed. John Flett Brown and Brian Murray, 2012). In addition to his four published collections, this includes poetry never published or published only in newspapers or other ephemera. As with most Orkney poets, there is always an undercurrent of fascination with the islands' Norse heritage in Rendall's poetry. Here is a snippet from the rather fine and stately 'King Hakon's Dirge', published in Orkney Variants (1951, pictured):

Death comes, alas,
On raven wings,
And even kings
Like shadows pass
From mortal things. 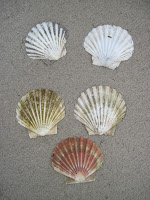 But some of his most delightful writing comes in the autobiographical prose pieces collected in Orkney Shore (1973), mainly about his development as a naturalist, but with some nice poetical snippets, too, here musing on the vernacular names of the sea-shells that were his life's work, in particular the 'shell names from farm animals [which] have a northern provenance':


The common mussel with its outline of folded wings and up-turned neb was soon transformed into a 'kraa' with blue-black plumage. The finely corrugated ribs of a cockle, which in Norway became a sheep's fleece, was with us replaced by similar ribs on a scallop shell, and so recognized as the mark of a gimmer-shell. A cat's face could be seen in the obtuse 'cattibuckie' and that of a dog in the neb of a spired winkle ...' (Orkney Shore, pp. 19-20).

A 'gimmer' is a year-old ewe, according to the Dictionary of the Scots Language and comes from Old Norse, though the word is not just Orcadian but is quite widespread in both Scottish and northern English dialects. The picture shows some scallop shells I found on the beach between Grit Ness and the Sands of Evie last week.

As a conchologist, Rendall of course picked up (Orkney Shore, p. 18) on the fact that the three-year old Egill Skallagrímsson (in ch. 31 of his saga), refers to the 'three silent dogs of the surf swell' that the juvenile poet got from his grandfather as payment for his first poem. The saga prose interprets this kenning as referring to kúfungar, or sea-snails, a term used for a large and diverse group of animals - it's a pity the Orcadian poet-conchologist didn't speculate a little more on just what shells these were, though he was fascinated by spiral shells:


The mind rests on its sheer loveliness, content, it may be, with the harmony of aesthetic values; or if so disposed, wanders in the dangerous but delightful labyrinth of speculative thought. This wonderfully contrived object, so specialised as to differ from all others in its class, yet not excelling in any intricacy of design, each in its own way being unique, what is it? (Orkney Shore, p. 122).

Material for a Poem 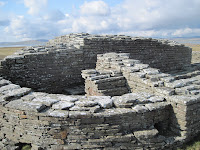 Here I am back in the Orcades on another busman's holiday. Next week it will be all business (though very pleasurable business, of course), but I came up a few days early to revisit old haunts and discover new ones. First off was Sanday, which was beautiful and fascinating in snow, rain, hail, sleet, wind and sun (or indeed all of those at the same time). But today I'm in a poetical mood and minded to blog about Wyre, which I visited yesterday in the most glorious spring sunshine (the photos show more cloud than I saw for most of the day).

Wyre was something of a pilgrimage for me. Since my last visit in 1989, I have come to know a lot more about its most famous inhabitants Kolbeinn hruga, who built the castle (pictured above), and especially his son, Bishop Bjarni Kolbeinsson. Bjarni was of course the well-travelled bishop who spent a lot of time in Norway (where his father probably came from). He may have built the lovely little chapel next to the castle pictured below. Bjarni is also the author of a fascinating narrative poem about the Jómsvíkingar, of all things, and their heroic defeat at the battle of Hjörungavágr - his literary activity was probably the last gasp of Orkney's twelfth-century renaissance. Having once translated his poem for a general readership, and having also written more academically about both the saga (some time ago), and various poems about the Jómsvíkingar (in a forthcoming article), I couldn't miss an opportunity to visit the place this learned man came from, though perhaps he, too, like his successor Edwin Muir, many centuries later, had to leave it to reach his full literary potential. Still, the castle (probably the oldest stone castle in Scotland) suggests that Wyre in the twelfth and thirteenth centuries was not then the rather modest place of eighteen inhabitants it is today. But they still appreciate their poets, and the small heritage centre has a display about 'Wyre's Poets', mentioning not only Bjarni Kolbeinsson and Edwin Muir, but also a descendant of Rögnvaldr's called Snækollr Gunnason, who is mentioned in Hákonar saga Hákonarsonar and probably also had a connection with Wyre, though his surviving poetic output is a bit meagre, to say the least. 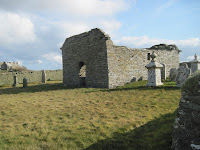 On returning from Wyre, I went to a lecture in the splendid Pier Arts Centre in Stromness about Margaret Tait, previously known to me as an experimental film maker. She gets a mention here partly because she made a film 'The Driftback' in the 1950s about farmers returning to live in Wyre, against the tide which then was all about leaving small islands, and partly because it turns out she was a poet, too. The lecture (by Sarah Neely of the University of Stirling) was about the importance of poetry to Tait's films, and the development of her films into what could be described as 'film-poems', but she also published quite a few poems on the page. Many of both her films and poems are about Orkney and it turns out that no Orkney poet can avoid turning their hand to Norse and Viking themes now and again. Here's a snippet from what I think is one of her better ones, originally published in the Orkney Herald in 1959 (and now in Sarah Neely, ed., Margaret Tait: Poems, Stories and Writings, Carcanet 2012, p. 113): 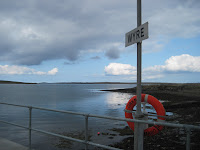 The equinox excited the Vikings out of their winter stupor,
Made other lands seem desirable,
Made the roving sea and the turning world all a prod, a birch upon them, an unknown waiting welcoming motion to receive them,
And in they went
With the prows of their vessels high and proud,
Their weapons clanging against their shields,
With the swift sides of their long ships entering between two lips of water
And at speed rushing -
Yelling off to fight the Irish.

Yesterday was just such a spring day, soon after the equinox, which would have excited the Vikings. Bjarni Kolbeinsson said, slíkt eru yrkisefni 'such matters are material for a poem', and, as a chronicler of similar deeds himself, I'm sure he would have approved.
Posted by Viqueen at 13.4.13 1 comment: