Norn But Not Forgotten 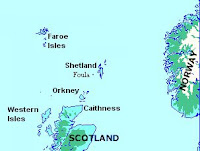 I drew attention to Shetland Forwirds, the group that is encouraging the use of the dialect in a post last April - and repeat that their website is well worth a visit if you're interested. Now I'm writing this while listening to a programme about Shetlandic on Radio 4, and particularly about poets and their use of the Shetland dialect (which is of course a form of English, or rather Scots). The 'Norn' element of this dialect consists mainly of lexical items (or 'words') which have survived from the old Norn language, which died out in about the eighteenth century. Much of this lexicon is to do with the landscape, weather, animals and so on, and such words are perhaps mostly of interest to either farmers or poets. It's interesting that several of the contributors describe finding words that have effectively died out but are, or were, still known to the older generation. Of course quite a lot of words that are strange to South Britons, even in Shetlandic, are just standard Scots words, this is hinted at in the programme, but no real distinction is made between the Scandinavian element and the Scots element. And I feel the programme misses an opportunity to explain the history of language in Shetland in a bit more detail, there is a tendency to present it as just another weird dialect, strange because it is so remote from the centres of culture, even Edinburgh.
But the poems sound great, so well worth listening again on the BBC website if you're in this country. I am pleased to note that the native Shetlanders, in particular, don't yet suffer from that ghastly falling intonation that affects so many modern poets in English when reading their work - that is enough to put you to sleep, or even worse, and certainly would put you off poetry entirely.
Posted by Viqueen at 29.8.10 No comments: 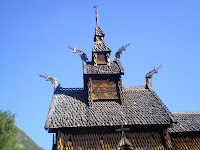 This blog, dear reader, as you know, does not shy away from the lighter side of Norse and Viking life. So I shall not tell you about the excellent papers, or the intellectual stimulation, of the 7th International Symposium on Runes and Runic Inscriptions which I attended recently in Oslo, but rather about the very fine post-conference excursion to runic sites in Valdres, Sogn and Hadeland. This was a repeat of the excursion we made at the 3rd Symposium, held twenty years ago, with the absolute high point being Borgund (pictured above), a wonderful stave church in its own right, but also runically the richest. And, as you can see from the photo, we had exactly the same fabulous weather as we did twenty years ago.
The runes were marvellous, as one would expect, but the trip was further livened by some of the quirky things that caught my eye. For instance, the rune stone (in excellent Old Norse and good Viking Age runes) put up outside Høre stave church by two brothers, to commemorate Gyða who refused to marry Harald Finehair until he was king of all Norway (we're talking ninth century or so, here). The brothers, Hallvard and Thomas Bergh, thus credited her with inventing the country of Norway - a topic foremost in everyone's minds in 1905, when the stone was put up. Or as the stone puts it, in normalised Old Norse, hon hafði fyrst í hug eitt Nóregs ríki. 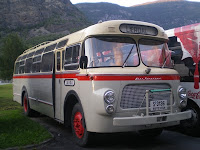 In Lærdal, where we spent the night, I was able to indulge in my passion for old buses, tractors and the like, with this very fine specimen (pictured left), which seems still to be usable (and, I take it, used), and was certainly spick and span. I have not yet troubled this blog with my numerous photos of rotting old buses in Orkney and Iceland, though I did present a very nice but elderly tractor in a recent blog about the Hebrides. So here is my first bus for you. Some rotting ones may follow another time. 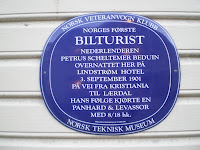 Still on the transport theme, Lærdal also offered a blue plaque (pictured right) commemorating 'Norway's first motor-tourist', a Dutchman who tootled that way in 1901. The day was rounded off with a most fabulous sunset (pictured below). 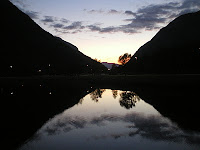 On the way back to Oslo, we stopped off at Granavollen, to see the 'Sister Churches', a rune stone, and to have dinner at the excellent gjestgiveri there. Delightful though all these were, I was especially happy to rediscover (and now photograph) a grave stone (pictured below) I remembered from twenty years ago, commemorating a certain Astrid Sofie Dynna, who had then only recently passed away. It's nice to see that her family are still bringing flowers to the grave, but I noticed it because she shares her first name with, and ultimately comes from the same farm as, the young woman commemorated by her mother on what is one of my favourite rune stones, the Dynna stone, which I had visited once again in the Historical Museum in Oslo, only days before. 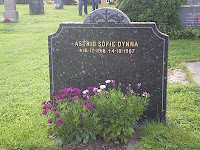 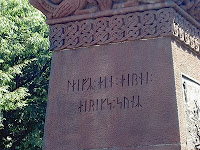 Lured by the intriguing headline 'The ruins of Viking Boston' (Massachusetts, not Lincolnshire, where it might have been more plausible), I went to the Boston Globe website to see what that was all about. It turned out to be yet another fascinating example of the 19th-century obsession with Vikings, as chronicled for Britain in Andrew Wawn's splendid book Vikings and Victorians. This particular Victorian was one Ebenezer Norton Horsford, described as a chemist, entrepreneur, and amateur archeologist, who was responsible for many of the Viking memorabilia still visible in Boston today. I followed him up in Geraldine Barnes's Viking America: The First Millennium, which puts him in the context of other Vinland-obsessed Americans of the time. I don't think that any of these mention the fine runic inscription on the statue, which says Leifr hinn hepni Eirikssonr in quite acceptable runes (see photo, above left).

This obsession extended well beyond the 19th century. I am reminded of a statue I had ignored all through my childhood, when playing in Fairmount Park, in Philadelphia, little knowing how interested I would be in such things later in life. It is a statue of Thorfinn Karlsefni, by the well-known Icelandic sculptor Einar Jónsson, and is one of a series of historical statues from throughout a century and a half in the parkland along the Schuylkill River. The history of the Thorfinn statue is explained in a book I picked up in a secondhand shop some years ago, printed in Philadelphia (no date, but not earlier than 1920) 'for private distribution by J. Bunford Samuel': The Icelander Thorfinn Karlsefni Who Visited the Western Hemisphere in 1007. Mr Samuel was carrying out the wishes of his late wife Ellen Phillips Samuel, who left money for the erection of 'statuary emblematic of the History of America'. The whole family was clearly fascinated by this kind of stuff, as the book includes a 'Story of a supposed runic inscription found at Yarmouth, Nova Scotia', by Ellen's brother Henry, and it was on Henry's suggestion that Mr Samuel chose a statue of Thorfinn to be the first in the series. The book contains all kinds of gems, including correspondence with the sculptor, with the Park Commissioners who were apparently not always as helpful as they could be in getting the statuary up and going, a detailed account of the dedication ceremony in 1920, and further ruminations on the non-runic stone from Nova Scotia. There's also a splendid (signed) photograph (above right) of Einar Jónsson working on the statue.
Posted by Viqueen at 8.8.10 2 comments: