'The Lover of Islands May See at Last...' 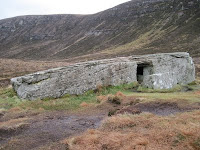 Yours truly is now back from her most recent septentrional excursion, to Orkney this time, a perennial favourite (see my 'About Me' photo). I think I'll devote two blogs to this particular rambling!

The occasion, as so often for me, was another academic conference, the splendid Inaugural St Magnus Conference, organised by the Centre for Nordic Studies in Kirkwall. Another stimulating event, packed with facts and interest, lots of interesting people, and well worth the trip in itself. But it wasn't all hard speaking and listening - it seemed crazy to go all that way for just three days, so I tacked on a few extra days and did some visiting of locations, sites and antiquities.
First stop was Hoy, the High Island, site of the Everlasting Battle between the father and the abductor of Hildr, a valkyrie-like female figure who resurrected the dead each night so they could fight again the next day  - though it's not at all clear why (for the full story, see Snorri Sturluson's Edda). The 'dark hills of Hoy' certainly conjure up macabre thoughts, even on a nice sunny day, and I think that particular story found its ideal location on it. I walked to Rackwick (a lovely south-facing bay much celebrated by Orcadian author George Mackay Brown) and back. That was around 11 miles, I reckon, including my detour (see below), not too bad when you are the Viqueen's age, I can tell you, and fighting against a fierce Orcadian wind for half of the way.
The main goal was, however, the Dwarfie Stane, a Neolithic rock-cut tomb (pictured above) which I have discussed in a recently-completed (but not yet published) article. What, you may ask, has a Neolithic rock-cut tomb to do with Norse and Viking stuff? Those in the know already know, of course, the rest of you can do some research, or await my forthcoming article. But I'll give you a clue - it's all to do with giants... 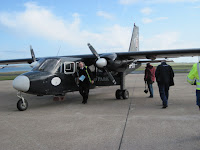 I have been to Hoy before, but every trip to Orkney I try to make it to another island that I have not yet visited (I think I am still only about halfway through the inhabited islands). This time, the destination was Papa Westray, or Papay as it is known both in Orkneyinga saga (Papey in meiri) and by the locals. Getting there is half the fun (on an eight-seater plane, pictured above), but this small island (roughly four miles long by one mile wide) has many attractions in its own right. How about the oldest standing dwelling in Europe at the Knap of Howar, ca. 5000 years old? Or a clearly-defined, though eroding, Norse naust? Or the delightfully-situated St Boniface Kirk, with its gravestones from many periods but also a late example of a Norse hogback memorial? And right in the middle, a fabulous large Orkney farm, Holland, with buildings going back to the 17th century, and a fine little local museum. Despite all the much older antiquities, I have chosen to illustrate this with something that really caught my eye, a golden version of the Maeshowe dragon painted on one of their large green tanks (containing I know not what, city girl that I am). All in all, a place with plenty to explore and enjoy on a sunny (if windy) day. 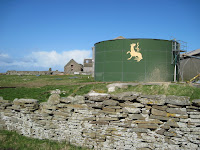 As the opening of the Kenneth Branagh/Marvel Thor film on the 27 April approaches, the publicity campaign is winding up. Today's Observer Magazine has an interview with Idris Elba, the actor who plays Heimdallr in the film. Once again, his blackness is brought up, though the interviewer has a nice line on this. 'As a black person who was born in Norway, I tell Elba I personally don't see what all the fuss is about', says Afua Hirsch, and quite right too. I merely repeat what I have observed before, that Heimdallr is described as 'the whitest of gods', and that the Vikings would absolutely have understood the casting of a black actor as just the sort of joke they practised in their own nicknames. (By the way, for any budding students out there, Norse and Viking nicknames are very much an underresearched topic...).
Heimdallr is obscure and fascinating. According to Snorri, in his Edda, Heimdallr was 'great and holy', not least because he seems to have had nine mothers (all at once!), who were also sisters (his father was Odin, of course). He has gold teeth (and hence the alias Gullintanni) and a horse called Gulltopp ('Gold-mane'). As appropriate to a watchman, he has excellent sight and hearing, and of course the trumpet called Giallarhorn which will warn of the coming of Ragnarök (see the picture above, from the Gosforth cross). His house is called Himinbjörg (hard to translate but either 'Heaven Rescue' or 'Heaven Sustenance'), and sounds an altogether wonderful place, pleasant, merry and serving good mead. No wonder Heimdallr is such a cheerful chappie. There's even a (mostly) lost poem about him, Heimdalargaldr, about which we had an interesting talk at the Viking Society the other day. About time this interesting god got some wider exposure - I wonder how much will actually get into the film?
Posted by Viqueen at 3.4.11 2 comments: