There has been some kerfuffle about the choice of a black actor to play Heimdallr in Kenneth Branagh's forthcoming film about Thor (eh? Kenneth Branagh making a film about Thor? What is the world coming to?) - see for instance this article in the Guardian. The kerfuffle is apparently between the politically correct who see this as a laudable example of colour-blind casting and the racists who point out that (a) Norse gods weren't black and (b) Heimdallr is called 'the whitest of gods'.
What no one seems to have taken into account is the fact that the Vikings might have had a sense of humour. It was once pointed out to me by an older gentleman, with extensive experience of  male bonding-groups during the war, that nicknames in such groups often mean the opposite of what they say, thus people called Shorty are usually quite tall. Although Snorri does call Heimdallr 'the white god', I think the only poetic source for this epithet  is Þrymskviða, that joky poem in which nothing is as it seems, which does call Heimdallr hvítastr ása. Given this, I wouldn't be surprised if Heimdallr was black.
Posted by Viqueen at 30.4.10 No comments:

The Web of Handwriting

The website handrit.is, a beta version of which has been available for a while, was officially launched in Reykjavík a week or so ago, according to this report in Morgunblaðið. The website brings together digital images of manuscripts now held in both the Copenhagen and the Reykjavík Árni Magnússon institutes, as well as Iceland's National and University Library (that splendid institution whose building is a younger, and more colourful, cousin of Nottingham's Hallward Library, at least so I was told by the former librarian, Finnbogi Guðmundsson himself, once. See photos). The website is a joint online public access catalogue of Icelandic manuscripts in the three collections, with, we are told, entries for over 4000 manuscripts and open access to images of 850 of these. Eventually all of the manuscripts will be electronically accessible. There is an interface for searching and browsing in Icelandic, English and Danish. Enjoy.
Posted by Viqueen at 27.4.10 1 comment:

The Long Way Round 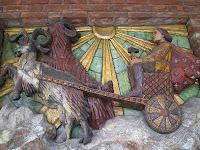 As stranded travellers all over the world return home, I am happy to report that we too are now back, as of this morning. The various members of the large group that went to Selja (see previous post) all came home in different ways and by different means. Most of the Nottingham group (now known as the Snotlingar) came back to England by a slightly circuitous route which had, however, the benefit of extending the field trip element and giving us all a chance to view some Viking landscapes and, in particular, to visit three important runic sites.
The first leg was the train from Bergen to Oslo, over the beautiful snowy mountains, and a few moments' experience of a real blizzard when the train stopped at Finse for the smokers (though it was not really smoking weather). The next day, a morning in Oslo gave some a chance to visit the Viking Ship Museum, some a chance to observe the modern monumentality of the Vigeland park, and me a chance to photograph the mythological frieze by Dagfinn Werenskiold on the Oslo City Hall, which I have long meant to do. I particularly liked Thor in his goat chariot (see the picture above). 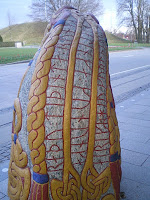 From Oslo we took the train to Sweden, where we picked up our own chariot in the form of a borrowed car (and a very nice one too, with quite a lot of goatpower), and spent the first night at Mjölby. More by accident than by design, it was a brilliant choice in that it enabled us the next morning to visit the nearby rune stones at both Högby and Rök. The drive through the Swedish countryside in the brilliant sunshine was also a highlight. We raced across the bridges to Denmark and then pressed on to our third and fourth rune stones of the day, at Jelling, which we saw in the soft and fading light of the day. It was good to see the stones before they are encased in their protective box (see my earlier post on this subject). I was also delighted with Erik the Red's very splendid modern rune stone outside the museum (see picture left). After a long day, we ended up just over the border in Germany, ready for our last road leg, to the Hook of Holland, where we gave the chariot back to its rightful owner, who had similarly been stranded in England. From the Hook we sailed to Harwich, happily meeting up with some others of the Seljumenn on the boat, and then arrived home at 3 am having first had to go to Gatwick to pick up my car that had been languishing there since we left.
All in all, a memorable trip, thanks to the Icelandic ash cloud!
Posted by Viqueen at 22.4.10 No comments: 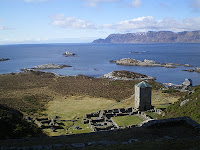 I find myself one of the many thousands of people around the world stranded because of the volcanic ash cloud emanating from Iceland. I am in Bergen, having nearly made it out before the ash struck, after a very successful trip to Selje (where we had a postgraduate conference) and the island of Selja, famous for the Seljumenn and St Sunniva, the patron saint of Bergen, and Norway's only female saint. Selja is a very special place, with a medieval monastery down below and up above the cave where Sunniva and the Seljumenn were saved from the murderous locals by being crushed to death by a fall of rocks. In front of the cave is an amazing terrace and a small chapel. The island as a whole was the finding place of at least four runic inscriptions. And, as you can see from the photo, a glorious view over Stadlandet. Highly recommended!
Posted by Viqueen at 16.4.10 4 comments: 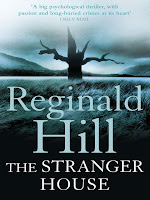 One of the pleasures of liking both Vikings and crime fiction is being able to combine the two. I particularly like thrillers and detective novels set in 'Viking' parts of Britain. They don't necessarily have to have a Viking theme, just being set in Shetland, like Ann Cleeves' excellent Shetland Quartet, is enough (though it wasn't enough for S. J. Bolton's Sacrifice, see my blog of 26 January 2009). But when there is a Viking theme, too, then it is time to wallow, as in Reginald Hill's The Stranger House (pictured), set in Cumbria and featuring a large Viking cross. My heartfelt advice, though, is to read it after you've been to Gosforth, not before. I also like spotting mini-Viking references in other novels where they don't really play a part. Stephen Booth's detective novels, fulfilling the criterion of being set in a picturesque part of the country (the Peak District), often smuggle in some very brief Viking references, probably almost unconsciously.
Funnily enough, the Scandinavians, who do such good detective novels, aren't so good at the Viking genre. I confess I never managed to finish Flateyjargáta by Viktor Arnar Ingólfsson, despite a promising island setting and the saga-links - I just got bored. Arnaldur Indriðason's Konungsbók was much more readable and quite successfully conjured up the Copenhagen of long ago, but the plot was so implausible as to be risible and in general it was not quite the page-turner of his modern novels. I may of course have missed something - if anyone has a good Scandinavian Viking-themed crime novel to recommend, do let me know!
Posted by Viqueen at 7.4.10 3 comments:

Shetland Forwirds, 'a group dedicated to celebrating and promoting Shetland dialect', which, as they say, 'has both Nordic and Scottish roots', has just launched a splendid new website. Here you can both read and listen to examples of dialect texts, look things up in an online version of John Graham's dictionary, and generally wallow in all things Shetlandic. The section on 'Proverbs and Sayings' will explain the title above!
Posted by Viqueen at 2.4.10 2 comments: