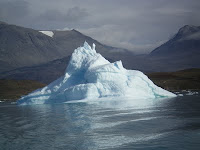 Many years ago, I read the novels A Town Like Alice and On the Beach by Nevil Shute - not that I remember much about them. He was very popular in the middle of the last century, but is not widely read now. For some reason, he came to my attention again recently, because of his interest in Vikings, and I have caught up with his 1940 novel An Old Captivity. I enjoyed it because it is partly set in Greenland, especially in Qaqortoq and Qassiarsuq (or Brattahlíð), places of which I have fond memories from my one and only visit to Greenland in 2008 (though I singularly failed to blog about them then). The story concerns an implausible attempt to do aerial photography in Greenland to demonstrate the existence of a Celtic (i.e. pre-Norse) monastery there, but involves some runic discoveries and a rather closer encounter with Leifr Eiríksson than one might expect.
Apart from the Greenland episodes, which are brief and awfully slow in coming, the novel is mainly of interest if you like aviation history and are particularly keen to know the mechanics of flying in difficult climates in the 1930s. There are certainly a lot of valves that need cleaning and complicated calculations involving the fuel mixture to ensure the flight will reach its destination, not to mention hooking the seaplane onto its buoy, which the girl gets to do. And the author never explains how people could sit in an aeroplane for 12 hours, dressed in a one-piece flying suit, without going to the loo. The author's views of women, or indeed anyone not a white European male, are also pretty antediluvian, even for 1940. But it's a rollicking enough tale, and passes the time nicely if you like that sort of thing. I am now ploughing through Shute's screenplay Vinland the Good (1946), on a similar theme, but even less exciting. I'm not surprised Hollywood never took it up.
Well, I don't exactly seem to be recommending the book, but at least it gives me an excuse to show you a photo of what many of us on that 2008 trip eventually began to call an 'AFI' ('another effing iceberg'; that's how blasé we got after several days of sailing up and down the fjords). And at least I discovered that Nevil Shute was really called Nevil Shute Norway, which seems appropriate somehow.
Posted by Viqueen at 28.5.11 2 comments:

It's been a good week for Norse and Viking stuff. I've been to see Thor, which was certainly more Marvel comic than Norse myth, but that was predictable. Then, after a very long wait, British television finally gave us a programme on the Icelandic sagas - what took them so long? It was part of a Scandinavian week on BBC 4, involving a very mixed bag of  Jar City, Night Shift, bits of Noggin the Nog, and various other things I didn't see. For those not in the know, Noggin the Nog (that's a picture of him) is a classic series of very simple animated films for children, in which the characters are loosely based on the Lewis chess-pieces, and the stories set in the 'Northlands'. Jar City is a film made some years ago of Arnaldur Indriðason's detective novel Mýrin, and Night Shift is a wonderfully wacky and pretty surreal Icelandic sitcom set in a petrol station (highly recommended).

But back to the sagas. It's great to have a TV programme on sagas, after many many years of waiting, and I am happy to admit that there were several things I liked about The Viking Sagas. The landscapes were great, and beautifully photographed. My esteemed colleague Heather O'Donoghue was earnestly enthusiastic about the literature. I liked the fact that saga-extracts were read out in Modern Icelandic. I also thought it was a good idea to focus on just one saga (Laxdœla saga): that allowed more depth than would otherwise have been possible. But the trouble with watching a programme on a subject about which you are knowledgeable is that it's hard to resist the urge to nitpick... Sorry guys, here goes.

I could just about put up with the title, and the fact that the programme had to end with Tolkien (who may have been influenced by Norse myth, but not so much by the sagas set in Iceland). However I do think neither is worthy of BBC4, though they might have been OK on BBC3. I wasn't impressed by Dr Janina Ramirez (not clear what she is a 'Dr' of) in any way, and was especially irritated by her overdone reaction shots. I didn't like the various errors (the statement that the genetic results showing a large proportion of Icelanders descended from females from the British Isles came from the DNA analysis of old bones, the related misleading statement that 'Aud the Deepminded' was 'British', the strong implication that the days of the week in modern English are derived from the Norse gods, and the strong implication that modern-day practitioners of the Ásatrú are somehow 'remnants'  of the old pre-Christian belief (rather than a modern reinvention). In general there was a bit too much mythology for a programme supposed to be about the sagas and their landscape. And I was completely mystified by the many hanging and revolving names and books... All in all, a curate's egg of a programme which I couldn't help feeling was not fully worthy of BBC4.

The days of the week also cropped up briefly in Thor, in the library scene, and continue to be peddled as evidence for Norse influence on English by the uninformed. The days of the week are complicated and not simply to be reduced in this way, nor do they necessarily all derive from a common Germanic pre-Christian origin. And a programme about Iceland should at the very least mention the fact that Icelandic doesn't have theophoric days of the week... Those who would like to know more are encouraged to read Philip A. Shaw's ‘The Origins of the Theophoric Week in the Germanic Languages’, Early Medieval Europe, 15 (2007), 386-401.

Well, dear reader, forgive me my rant. In the end, though, I feel positive about it all - it's great that there is so much interest.
Posted by Viqueen at 13.5.11 8 comments: 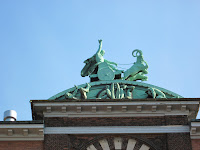 I mentioned in my previous post that I had been on various other Norse and Viking rambles, one was to an academic conference in Copenhagen on molecular views of colonisation which, being a serious academic topic, I'll slide by here in this frivolous blog. The conference took place on the old Carlsberg brewery site where, I'm told, beer is no longer brewed except for a few very special barrels. But it's a glorious place which, I confess, I had never been to before, despite numerous visits to Copenhagen over the years. Among the eclectic architectural marvels there, I spotted Thor in his goat chariot on top of the old brewhouse. So I picture him here since it's his week, with the new film just out.
Posted by Viqueen at 7.5.11 2 comments: 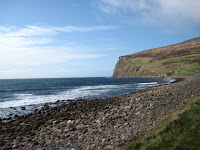 Several weeks ago, now, I promised a second blog inspired by my recent rambling to Orkney. The unfortunate delay has been caused by my indulgence in even more Norse and Viking ramblings in the meantime, on which I may report when (if) I get a moment... But I did want to do a second Orkney blog, this time about poetry, which is, in my view, one of those essential aspects of life which get far too little airing here (care to suggest some others?).
Various things conspired to make me think about Old Norse influence on modern poetry in English. Now there are plenty of books and articles that will tell you about poets from the sixteenth century onwards who have written on Norse and Viking themes of one sort or another. But there is relatively written about those brave poets who have tried to write, in English (or some form of English), in that most demanding of metres known as dróttkvætt or, to the uninitiated, simply as 'skaldic' verse. There aren't that many, here I'd like to present three.

That great 'lover of islands' and fan of Iceland in particular, W.H. Auden, once tried his hand, published in Secondary Worlds (1968):


Hushed is the lake of hawks,
Bright with our excitement,
And all the sky of skulls,
Glows with scarlet roses;

It sounds quite good, and even manages to follow some of the rules, though those who have mugged up on their skaldic metres will straightaway see that the alliteration is not quite perfect. But what does it mean? (The second half stanza is even less comprehensible.) That, by the way, was a rhetorical question, so please spare me your literary analyses; over the years I have quite convinced myself it means nothing at all, and that the great WHA only did it so that he could write the following sentence, a memorable piece of literary criticism:


It is clear that in such verse it would be absolutely impossible to tell a story. Sagas, if composed at all, would have to be written in prose.

My next poet is a much more obscure one, the Kirkwall draper and conchologist, Robert Rendall. An excellent poet, in my view, though you do have to have a taste for the kind of poetry that was already well out of date by the time he wrote. His poems are little known, and I am quite proud of my small but perfectly-formed collection of his works, many of them published in Kirkwall and therefore quite hard to get hold of. When not draping, or collecting shells (on which he was an acknowledged scientific expert), he wrote pious sonnets, or dialect verse. Once, though, he had a go at what he called 'An experiment in Scaldic metre' in the poem 'Shore Tullye', published in Orkney Variants and Other Poems (1951). Rendall doesn't gloss 'tullye', but according to Hugh Marwick's Orkney Norn (1929) a 'tully' is 'a large kind of knife with a blade fixed in the haft; used chiefly for splitting fish or cutting up meat'. It seems appropriate, though I'm not absolutely sure it's right, but then I haven't found anything else it could be. Apart from (or perhaps because of) the dialect words, Rendall's poem at least makes sense:


Stretched the battle beachward;
Bravely back we drave them.

But he too fails in the proper alliteration of the last two lines:

But of course real poets find their inspiration where they can and don't generally let themselves be trammelled by metrical pedantries. While in Orkney I met the Scottish poet Ian Crockatt, who is currently doing a PhD on how to 'translate' skaldic poetry, from the point of view of a creative writer rather than an academic like me (interesting for me, since we work on the same poet). He has published a chapbook called Skald: Viking Poems (2009) - the title says it all. In this collection he 'tried to keep to original features like the strict syllable count and the patterns of alliteration, internal rhyme and half-rhyme' while making no attempt to reproduce the kennings. Here he is, also on some raiders, from 'His Ring':

So there you have it, three poets, three approaches, but what they have in common is that their poems foreground the sounds. And good for them.