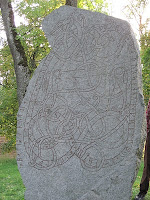 Your intrepid Norse and Viking rambler has just returned from a runic ramble in Sweden, where perfect weather and congenial and learned company enhanced the already delightful process of the close study of runic inscriptions in a variety of media and with a variety of more or less comprehensible texts. Among many other delights, I offer you (left) a photo of what might be the only memorial inscription on a rune stone commemorating the commissioner's aunt. Fathers and sons, yes frequently; mothers and daughters, not so common but still quite a few; sisters and uncles are rare but there. But I think this is the only auntie, or father's sister in this case (if indeed that is what the text says - half the fun of runic inscriptions is that we are not always 100% sure), in the Swedish Viking Age corpus. Hurrah for aunties everywhere! 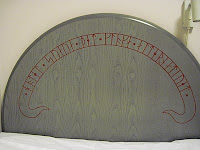 The runic theme of this short trip was enhanced by the only partially deliberate decision to stay in the Hotel Svava in Uppsala, possibly the world's only runic-themed hotel. As you can see from the photo to the right, every bedstead in the place is enhanced by a runic inscription - the runes are proper, but the message is in modern Swedish (I leave you to spell out the advertising message for yourself). A very distinguished runologist on the ramble admitted to me that she had devised the inscription many years ago when the hotel opened - despite the occasional ribbing she has received, I think it's splendid. It did make me wonder about other runic hotels. I do remember seeing a splendid runic banner at the Kettletoft Hotel in Sanday, Orkney, when I was there in I think 2000. I wonder if it's still there?

But the best bit of runic tourism is surely the airport at Kirkwall. Not only are the runes proper Viking Age ones, the spelling is pretty good (the place was called Grimsetter when the RAF built an airfield there in 1940), written in pretty good runic orthography as krimsitir (though in Old Norse it would ideally be krimsitr, or setr with a dotted i-rune). I haven't found out which runologist, if any, was responsible for this one, though. Now why can't the baggage tags be in runes when you fly to KOI-Kirkwall? 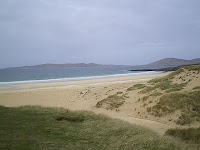 At last, a TV programme on the Vikings that was coherent, and had both interesting and new information. Well done, BBC2 and Alice Roberts, and the Digging for Britain series. The only downside is the title - 'Invaders' - but otherwise the programme is highly recommended and can be viewed by readers in the UK for another 22 days on BBC iPlayer, if you haven't seen it already.

Dedicated readers of this blog will recognise many of my favourite Norse and Viking things on the programme. It managed to pack in many of several places (Lewis/Harris, Orkney), things (the Lewis chessmen) and finds (the St John's College skeletons) already mentioned here, some of them more than once. Place-names got a very brief mention (well, only Horgabost, really), as did runes.

There were in fact glimpses of two recent runic finds, one from the Brough of Deerness which has, alas, not yet revealed its linguistic meaning, and (unacknowledged, but clearly visible for a brief moment) a spindle-whorl from Lincolnshire. The latter could have deserved some more discussion for, as John Hines has noted, while 'there's quite an essay to be written over the uncertainties of translation and identification here; what are clear, and very important, are the names of two of the Norse gods on the side, Odin and Heimdallr...' Unusual enough in an Anglo-Scandinavian context, but especially so given the object seems to be from the eleventh century and made locally.

All in all, an excellent programme, though I do think these recent finds have some way to go before they match up to some of those from earlier years. Some grubby steatite from Horgabost, or a wonky gaming-board from Deerness, despite the cooings of Alice Roberts, don't quite set the pulse racing as do the fabulous finds from Scar (excavated in 1991) or even the delicate bone pins found at the Udal on North Uist, some made from bird-bones. The Udal was excavated between 1963 and 1995 and now looks like it will get a proper publication. So it's not surprising that the programme ended with these blasts from the past.
Posted by Viqueen at 17.9.11 7 comments:

Björk is back! I heard the Icelandic songstress this morning on Radio 4, of all things, plugging her new album. The thing that struck me most about the interview was when she said that 'the Icelandic people LOVE volcanoes, that's the most beautiful thing they can think of'. This coincided with my coming across another form of montanic effusion today, a 'poetry-spouting mountain' (thanks to MCR for putting me on the right track!). It occurs in ch. 6 of Hálfs saga ok Hálfsrekka - the plot is far too complicated to explain here, suffice to say that a Norwegian king sailing in the Jutland Sea suddenly sees a mountain rise up in the north and speak a verse prophesying various deaths arising out of the death of a Danish king's daughter he has just married. Is this the only mountain in world literature that speaks poetry? If so, it's no wonder the Icelanders loved it so much, just like their volcanoes....(the saga goes on to tell us that the Reyknesingar, of south-west Iceland, are descended from that Norwegian king, and there are further connections later on in the saga). Or is it just a load of hot air?
Posted by Viqueen at 9.9.11 No comments: 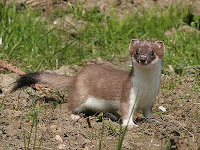 Two of the most famous references to cats in Old Norse literature are to the fact that the goddess Freyja drove a chariot drawn by two cats, and to the catskin trim of the hood and gloves of the travelling Greenland prophetess in Eiríks saga rauða. At first glance, these seem fairly straightforward. As the expression 'it's like herding cats' reveals, it's pretty hard to get cats to do anything at all, let alone pull a chariot containing a well-upholstered goddess, so the implication is that only someone with supernatural abilities could possibly have a cat-powered wagon. And as for the Greenland prophetess, it's obvious she is just weird, and you would be well-advised to keep your pet kitties away from her for their own safety. But there may be more to both of these references than meets the eye. And yes, the photo is of a stoat, not a cat.
In that still-indispensible reference work Kulturhistorisk leksikon for nordisk middelalder, Johan Bernström argued that, in both of these instances, the word köttr refers not to the domestic cat, felis catus, but rather to the stoat, mustela erminea, and I think this suggestion has much to recommend it, though I do not often see it cited. The white coat of the stoat in winter (pictured below) is the source of that highly-desirable fur known as ermine, and the Eiríks saga reference explicitly states that the prophetess's kattskinnsglófar were hvítir innan ok loðnir 'white and furry on the inside'. She also had a hood lined with kattskinn hvít 'white catskin'. White cats are not that common, and it seems to me much more likely that the extraordinary outfit of the prophetess was made even more spectacular by the addition of ermine.

Similarly, though the other case is much less clear, it seems to me more likely, given the status of ermine, that Freyja's wagon would be said to be pulled by the animals that provide such a noble fur.

The archaeological evidence for when exactly cats were introduced into Norway and Iceland is not very clear, and a recent MA dissertation on the subject has not to my mind fully clarified the matter (it's also pretty wonky on the literary sources). There is plenty of scope here for further study. But it seems clear enough that cats were introduced to Norway before the Viking Age, and that they followed the migrants to Iceland in due course - as confirmed by the recent discovery of a cat's jaw in a burial at Ingiríðarstaðir - and presumably to Greenland. Stoats, however, did not cross the Atlantic, at least not alive, though their furs must have done.

The odd thing is that the modern Norwegian for stoat is 'røyskatt', ON hreysiköttr, a secondary formation based on the comparison with a cat. This doesn't necessarily mean cats came first, just that stoats must also have had another, earlier name which we now don't know. But there is an interesting reference in Orkneyinga saga, when Earl Þorfinnr persuades Kálfr Árnason to fight on his side against Rögnvaldr Brúsason by saying that he doesn't want to be skulking sem köttr í hreysi while Þorfinnr fights for their freedom. What does this mean?  A hreysi is either a 'cairn, heap of stones' or a 'cave' of some sort, in general a rocky place. And stoats are known to live in rocky clefts and crevices (though they have a whole range of habitats). Stoats are not native to Orkney, indeed the first intruders had to be forcibly removed from there only last year, but the expression could derive from Norway and be proverbial. So I do think there is a stoat allusion there, even though the Penguin translation of Orkneyinga saga gives 'like a cat in a cave'. Have you ever seen a cat in a cave?

Finally, on stoats, it is sometimes claimed that the animals pictured left, carved on the processional wagon from the Oseberg ship burial, are cats. It seems to me they could equally be stoats.
Posted by Viqueen at 3.9.11 2 comments: