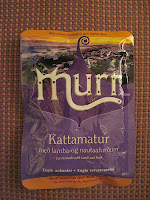 I'm just back from a lightning visit to Iceland. The educational business that took me there and the shortness of the trip didn't allow for too much sightseeing, and my biggest disappointment was missing the Northern Lights which apparently put on a good show on the first night I was there, while I was too ensconced in the hotel bar to notice. It's embarrassing in my profession never to have seen the Northern Lights, but there was at least a certain Northern Cats theme to my visit. The picture shows a sachet of the Icelandic cat food I brought back for my own little friend - notice that even this is marketed using a Viking ship! Iceland has to import quite a lot of things, but I guess all their livestock farming gives them the wherewithal to make their own ekta íslenska framleiðsla fyrir köttinn þinn 'genuine Icelandic product for your cat' from the more unspeakable bits of sheep and cows. I think my own furry friend prefers Sheba, but she didn't entirely turn her nose up at Murr kattamatur. 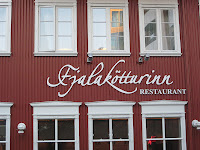 I, too, was well-fed in Iceland, about which the less said the better. More importantly, I photographed, but did not eat at, the splendidly-named restaurant Fjalakötturinn. This word seems to be a variant on the mousetrap-kenning I discussed in an earlier post, where the medieval version was a tréköttr 'wooden cat', whereas this one is better translated as 'plank-cat'. I'm not entirely sure it's the best name for a restaurant, but it's good as ever to see kennings still in use. Apparently, the building is modern, but built on the site of an earlier one with the same name (I haven't been able to discover why), and even earlier there was a Viking longhouse on the site, not surprisingly, as the restaurant is right next to the Reykjavík 871±² settlement exhibition. 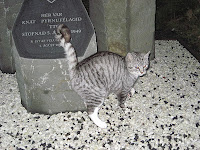 On my last evening I photographed this rather beautiful pussycat (right) on the seashore near my hotel. It is standing in front of a monument celebrating the fact that the football club Þróttur was founded on that very spot. The club's name means 'strength', and some think it is one of Odin's names. The word also appears mysteriously on some rune stones in Sweden, about which I have written recently, but I digress. The spot in the photograph is actually rather interesting, since there are some old (or not even so old) fishermen's huts, known as Grímsstaðavör, still standing (see below, in the romantic gloaming), the last remnants of the fishing heritage of the area before the complete suburbanisation of Reykjavík. What with cats, Norse mythology, ruins and much more, there was plenty to catch my interest in that short evening walk along Ægissíða. Even better than the Northern Lights, though I still hope to see those one day. 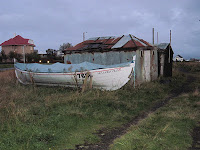