All Over the Place 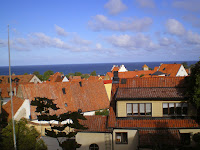 Inspired by the news that that stupid organisation Facebook apparently has located the lovely Baltic island of Gotland (see the view of Visby to the right) in the equally lovely country of Norway, I turned to that monumental mine of information on Norwegian farm-names, Oluf Rygh's Norske Gaardnavne, published 1897-1936, but available on the internet since 1999, thanks in part to Norway's special arrangements for conscientious objectors to military service....

There I did indeed discover that there are at least three farms called Gotland in Norway, two of them in Hedmark, which is I believe where Facebook located the Baltic island. There are also four occurrences of Danmark, for one of which Rygh notes that the names of foreign countries were often used in more recent farm-names, and indeed there is even a Sverige in the north of Norway. The Finlands are more complicated, since there the first element might be the word Finnr, meaning a 'Lapp, Sami'. Other explanations are also possible.

Moving over to the British Isles, it gets interesting. There are four Englands in Norway - which could be named after the country, or could contain the first element eng meaning 'meadow, pasture'. How do you tell the difference? Well the tones (pitch contours) of spoken Norwegian help! With Tone 1, the meaning is the country England, with Tone 2, it is the meadow-word. Similarly, the two examples of Skotland are pronounced differently, so only one of them is likely to be named after the country. Ireland, however, does not appear in this collection of farm-names.

And moving across the North Atlantic, we find four examples of Island. The etymologies (based on the earliest recorded forms) of all of these are quite complicated, but at least one of them seems to be named after the country, at least according to Rygh. And of course anyone who has been to Oslo knows about Grønland near the central railway station...once upon a time it was a farm, of course. All five of the Norwegian occurrences have Tone 1 and so appear to be named after the country.

Who says Old Norse is a useless subject? I do think those good folks at Facebook should study that and onomastics as well!
Posted by Viqueen at 4.5.15 2 comments: