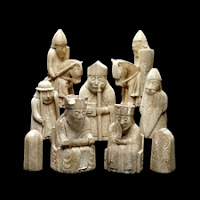 I am just catching up with the controversy about the Lewis chess pieces, which Alex Salmond, the First Minister of Scotland, is demanding are returned to Scotland. I do think it would be nice for the Isle of Lewis to have some, since they were originally found there (there are of course some in Edinburgh, in the National Museum). But these nationalistic arguments do tend to gloss over the fact that the chess pieces were almost certainly made in Norway, and were probably on their way to somewhere completely different, such as Dublin. There is a fairly balanced article in The Scotsman for 7 January 2008, citing very reasonable comments from Alex Woolf and James Fraser, and less reasonable ones by Ted Cowan, who argues that they should all be in Lewis.
Posted by Viqueen at 8.3.08 No comments: