The Feast of St Óláfr 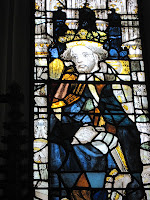 It is the feast day today of Óláfr Haraldsson, warrior, king, saint and eventually rex perpetuus Norvegiae, killed in 1030 at the battle of Stiklarstaðir in Trøndelag by an army including many of his own countrymen. The best place to celebrate this feast is in Tórshavn, where it is also the national day of the Faroe Islands. On this day every year the Faroese celebrate their Ólavsøka by racing traditional rowing-boats (men and women), wearing patterned knitted socks and jumpers (men) and mass chain-dancing to the old ballads in the streets (everyone, including tourists) - an experience highly to be recommended, even if, like me some years ago, you had to do almost all of it in the driving rain. But what's weather to a true Viking?

One of the interesting things about St Óláfr is how quickly his saint's cult spread, especially in the British Isles. By no means the earliest reference to it is in the Anglo-Saxon Chronicles which say that when Earl Siward of Northumbria died in 1055 he was buried in the church that he himself had built at Galma(n)ho, and which (according to version D) he had consecrated to St Óláfr. This is presumably the ancestor of the present St Olave's church in Marygate in York, which has a fifteenth-century stained glass window almost certainly depicting the Norwegian saint. There are also some more modern representations of him in both stained glass and sculpture, and a large Norwegian flag. 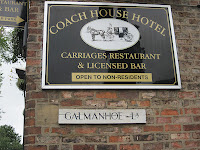 On my recent visit to York, we stayed in the Coach House Hotel, on the corner of Marygate and Galmanhoe Lane, and just yards from St Olave's. According to A.H. Smith's Place-Names of the East Riding of Yorkshire and York the name 'Galmanhowe' is lost, though there is a variety of evidence other than the Anglo-Saxon Chronicles to support its erstwhile existence.The current street-name appears to be a result of modern antiquarianism, and apparently dates from only the 1970s.
Posted by Viqueen at 29.7.12 2 comments: 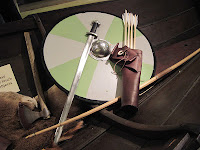 Some specialists are a wee bit sniffy, I'm told, about the Jorvik Viking Centre, but I've always thought it's rather a good thing. It has certainly been around for nearly three decades now, so it has had to have a few revamps along the way, and it's been a while since I last saw it. Taking a relative for a mini-break in York the other day gave me a welcome chance to view its latest incarnation, and I've come away with the conviction that it's still excellent edutainment. It simplifies, as it has to, but not in a bad way.

What's interesting is that the balance seems to be swinging more and more to the edu-, but still with sufficiently good -tainment for the punters to keep flocking there. The ride is more or less as ever, though regularly tweaked, and not so long ago spiced up with new dialogues (written and voiced by a colleague and students at the University of York). But the before and after the ride are both impressive, with some real nuggets of knowledge presented in an accessible way. The before gives you a useful summary of the excavations which form the basis of the ride, and lets you stand on the site, as it were. The after plays a bit to the gallery with skeletons, the famous Great Viking Turd, and so on, but also smuggles in a lot of useful stuff about palaeopathology, isotope analysis, metalworking techniques, and much more. All kinds of multimedia are used, prerecorded speakers, live intepreters with horns for you to blow if you dare, computer graphics, touch screens. The main criticism of the after bit is only that it's too small. It's a tribute to how interesting the stuff is that the rather narrow corridor with all this excitement was jammed with people looking, reading and learning, rather than heading straight for the shop.

We also dropped into the new temporary exhibition, Valhalla: In Search of the Viking Dead, around the corner. It had far fewer bells and whistles and for me it didn't fully explain the links between the various skeletons, sculpture and reconstructed artefacts on show, while the children's section had some nice things about Norse mythology, without for obvious reasons going too much into death and dying in Norse life and myth... Still, at least it was free with a Jorvik ticket, and the York Minster sculptures were well worth seeing.
Posted by Viqueen at 27.7.12 1 comment: