I have to confess I am not terribly fond of twentieth-century novels that are set in the Viking and Norse periods. I'm not sure why, but I think mainly because they are so predictable. I'll refrain from naming and shaming any of those that I have begun but been quite unable to finish. But there was one exception: a few years ago, soon after it came out, I read Margaret Elphinstone's The Sea Road, and found it enjoyable, both as a novel, and as a believable depiction of the world at that time.
I've now been using the Christmas break to catch up on the first novel she ever wrote, Islanders, derived from her own experiences of living in Shetland, which included bird-watching on Fair Isle and doing archaeology at Barbara Crawford's Papa Stour dig. Both of these islands feature in the novel, which is mostly set on Fair Isle in the twelfth century. It's an accomplished novel, introducing a range of likeable and (from a modern point of view) believable characters, and has some good ethnographic descriptions of the daily life and grind on a small island where the diet is definitely not for vegetarians. There is some violence, but much less than you would expect, and overall the picture is rather cosy, despite the harsh living conditions. It's very much a woman's view of the late Viking Age. There is little or no saga pastiche (the downfall of many other 'Viking' novelists), but the author rather skilfully weaves in lots of allusions to both sagas and poetry, some obvious, some less so, showing that she has done her homework, both in reading the literature, and in understanding how it might have worked in that period. It's a satisfyingly, but not excessively, long book, and the end leaves you wanting to know more - unfortunately Elphinstone never wrote the sequel.
So, the overall verdict is a good read with which to while away the long winter evenings, even if you are allergic to 'Viking' novels.
Posted by Viqueen at 31.12.10 3 comments:

The quotation above comes from an interview with David Willetts, the Universities Minister, on the Guardian website back in October, which I've only just caught up with. The minister claims to 'care' about Old Norse, but in effect says it will be cut (for a good analysis of what he is really saying, see this recent entry in Seph Brown's blog).
My own blog concentrates on the lighter side of Norse and Viking life, and is an entirely frivolous (though enjoyable to me and, I hope, others) supplement to my day job. But let it never be forgotten that even such frivolities would not be possible without a lifetime spent studying Old Norse, and then all that goes with it. The minister's statement, coupled with the government's unashamed attack on academic subjects that do not bring an instant pecuniary reward (most of them, surely?) demonstrates quite clearly that the government does not actually want the country to be civilised. Tremble, everyone, tremble...
Posted by Viqueen at 28.12.10 No comments: 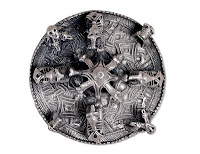 The quotation from Robert Louis Stevenson in my previous post prompted me to read his little story, The Waif Woman, which has been sitting on my shelf for some time waiting for an appropriate moment, though it's not at all long. It was not published during his lifetime, but our library has a nice little edition from 1916 (if you haven't got such a good library, you can read it online from Project Gutenberg and elsewhere). The story begins 'This is a tale of Iceland, the isle of stories' and it is a fine example of Viking Victoriana, with lots of 'goodmen', 'goodwives' and 'fiddlesticks', and a few gratuitous alliterations and archaisms ('It was a wild night for summer, and the wind sang about the eaves and clouds covered the moon, when the dark woman wended'). The plot is quite closely based on the well-known and colourful story of the Hebridean woman Thorgunna in Eyrbyggja saga - RLS has a Thorgunna, too, a strapping lady of a certain age, like her literary predecessor (not quite how we imagine a 'waif' these days, though she is indeed a wandering, homeless person). But the other characters have different names, and some aspects of the story are different. In particular, a silver brooch plays a part in the plot:


Here was a cloak of the rare scarlet laid upon with silver, beautiful beyond belief; hard by was a silver brooch of basket work that was wrought as fine as any shell and was as broad as the face of the full moon; and Aud saw the clothes lying folded in the chest, of all the colours of the day, and fire, and precious gems; and her heart burned with envy.

There is no brooch in Eyrbyggja saga but clearly RLS knew how important they were in the Viking Age, and liked brooches too - the comparison here with the moon is not unlike his fancy that brooches were made 'of star-shine at night', quoted in my last post. I don't know how much RLS really knew about Viking brooches, but I have used a picture of a tenth-century Borre-style disc brooch from Gotland, which I found on the British Museum website, and which would surely have amazed Aud if she had seen it.
Posted by Viqueen at 16.12.10 3 comments:

'I Will Make You Brooches and Toys for Your Delight ... '

... wrote Robert Louis Stevenson in his posthumously published Songs of Travel (1895). While Stevenson promised to make them 'Of bird-song at morning and star-shine at night', those vagabond Vikings also appreciated the delight of brooches, but made them more prosaically from shiny metals. I have for some time been interested in the work of Jane Kershaw who has studied metal-detectorist finds from recent years, particularly those in a Scandinavian style and those which which were most characteristically worn by women. Jane has recently received her doctorate for this work, and published a solid, academic summary of her results in Viking and Medieval Scandinavia 5 (2009). A shorter and more accessible version can now be read online, in the November/December 2010 issue of British Archaeology. As Jane points out, the bulk of finds come from Lincolnshire and Norfolk. While this partly reflects possible find-spots in these predominantly agricultural regions, the East Anglian finds in particular shed new light on Viking activities in that area, where there is comparatively little other type of evidence in the form of place-names or sculpture. But such items are also found elsewhere in the Danelaw, and the picture shows my nearest example, a late 9th- / early 10th-century copper alloy trefoil brooch found in Nottinghamshire. It has suffered in the last thousand years or so - you have to imagine it when it was new!
Posted by Viqueen at 10.12.10 No comments:

I've just discovered a fun new website called Wordle, which makes fabulous 'word clouds' out of any text that you put into it. I put the text of a forthcoming article of mine in, and got this splendid cloud. You can click on it and get a bigger image if you like, to get a preview of what the article will be about.
Enjoy!
Posted by Viqueen at 4.12.10 2 comments: 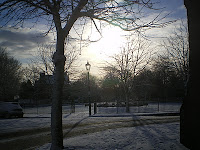 After all my recent ramblings, jolly though they were, it is in fact a relief to stay at home for a bit and get down to some real work. But now I find the North is coming to me! At least, if you believe the papers. They are full of how 'Scandinavian' this weather we have been having recently is. The snow is not copious (at least not here in the dry East Midlands), but it is hanging around and looks quite pretty. And of course very Nordic. So here's a picture.
Posted by Viqueen at 1.12.10 1 comment: