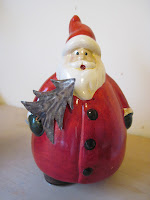 A sentiment with which all readers of this blog will concur, I hope. It comes from a piece by Kevin Crossley-Holland in 'The Week in Books' column in the Guardian (it's apparently not on their website, so you'll just have to go out and buy the paper!). He is a spokesperson for the Norwegian Christmas tree project in Trafalgar Square ('Look North More Often' being their motto), and writes evocatively of going deep into the forest to select and remove the big tree, and the 'death-in-life, life-in-death' feeling you get at such a moment, when the tree of life is felled but comes to a kind of new life with its lights for the festive season. At such moments, we think of the dreadful year the Norwegians have had, and how bravely they have borne it.

And just to cheer things up, though it is a bit early for the festive season, I append a photo of a delightful tree-bearer I picked up in the Sally Army shop in Majorstua, on my most recent visit to Oslo.
Posted by Viqueen at 26.11.11 2 comments:

After a lightning trip to Oslo on academic business last week, your intrepid blogstress was off on her rambles again, this time the annual postgraduate field trip to the north-west of England with some enthusiastic students. The cultural high point, as ever, was the Gosforth Cross, though all the familiar old hogbacks, runes and place-names we visited were also wonderful. But for a stunning landscape, the undoubted gem was, as ever, our overnight stay in Wasdale.

Although Wasdale in Cumberland is not so very like Vatnsdalr in Iceland (about which I blogged recently), it is after all the same name, and since my return I have amused myself by seeking out some parallels between the two. It had always struck me that the account in ch. 15 of Vatnsdœla saga of Ingimundr's arrival in Vatnsdalr must represent the reactions of many a Viking settler to their new homeland, wherever that may have been. As Ingimundr said:

'... I now see a land expansive in its spaciousness, and if the conditions are as good as the size, then it may be that this is a good place to settle.'

After a brief interlude in which Ingimundr's wife gives birth to a daughter by the riverside, they proceed in their explorations:

Then the party made their way up into the valley and saw good agricultural conditions with respect to pastures and woods; it was beautiful to look at; people's brows unfurrowed.

Driving from Gosforth to Wasdale Head reveals both woods and pastures, the latter populated by large numbers of sheep (pictured above). Ingimundr, too, had lots of sheep, indeed a valley called Sauðadalr is said to have taken its name from some of his sheep which disappeared but were then found later on in the woods having spent the winter out of doors. The Herdwick sheep of Cumbria, too, are famous for their hardiness and for knowing their way around their patch. Ingimundr also had some problematic swine, and the Lake District is awash with Swin(e)dales and Grisedales. Natural resources are good too. In ch. 22 of the saga, we're told that there was veiðr mikil ... í Vatnsdalsá, bæði laxa ok annarra fiska 'much fishing ... in Vatnsdalsá, of both salmon and other kinds of fish'. Near Wasdale is Waberthwaite, the first element of which seems to come from an ON veiði-búð or 'fishing hut'.

When he died, Ingimundr was given a boat burial, presumably with a mound (ON haugr) over it. The EPNS volume for Cumberland lists some 17 minor names with 'how' in Wasdale alone, though, as Diana Whaley points out in A Dictionary of Lake District Place-Names, the element is prolific and can be used for both natural and artificial features, the latter including burial mounds. Disappointingly, the first element in the evocative Boat How was nothing to do with a burial but is from búð 'booth, hut' again.

Not that any of this proves anything at all, only that Viking settlers sought out similar landscapes, and used their well-established vocabulary to name those landscapes. But it's fun, and it's no wonder that those 19th-century antiquarians found themselves inspired by the links between Iceland and Lakeland.