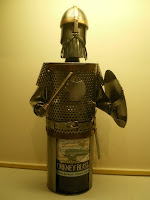 I've just been given this splendid present, a Viking wine holder (wine bottles fit perfectly, but in the picture I used some jiggery-pokery to put a more appropriate bottle into the holder). His name is Thorfinn Blast, and he is every inch the Viking warrior. Note his lack of horns, which is pretty good, especially if you compare him to my other two Vikings, Einar Rope-Arms (the brown one) and Brusi Bubble (the rather silly one with a moustache and ears [EARS?]). 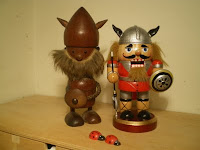 Einar is an old Danish Viking, probably from the 1960s when such things were very popular, while Brusi was acquired only a week or two ago from the German Christmas market in The Square in Nottingham. Every year they have a stall with fun wooden figures, and this one was irresistible, though not terribly Viking. He can, however, cleverly move his mouth... As to Thorfinn, well I don't know where he came from, do I, as he was a present!

In case you were wondering, the ladybirds don't have names.