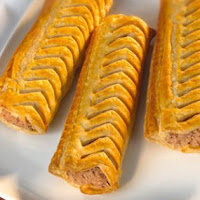 There's no stopping the march of Vikings into the world of advertising. The latest one I have just caught is an advert for Walls' sausage rolls, showing one of the Vikings of Middle England tucking into one just after he becomes 'dead' on the battlefield. I reckon the ad company got the demographic, of both sausage rolls and Viking re-enactors, just about right. What's a bit odd is that it is all part of a 'Bring it on Britain' campaign. But then Vikings have been an essential part of Britishness since at least Victorian times.
Re-enactors obviously have a lot of fun and good luck to them. I find the whole phenomenon fascinating though, as a 'proper academic' I can't help shuddering at their ideas of 'authenticity' which some groups, like the VME, make a great song and dance about. It's not that difficult to find out about Viking runes (a topic on which I have moaned before), but they never seem to bother, thus the VME website has both a slightly dodgy runic logo, and some curious misinformation about rune stones.
Ah well, it's all part of the fun. And it provides a raison d'etre for degrees in Viking Studies which some people see as somewhat Mickey Mouse, but someone has got to teach people 'proper' Viking stuff.
Posted by Viqueen at 12.7.10