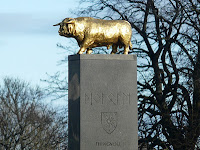 Some years ago, on one of my rambles to Orkney, I stopped off in Dingwall, Ross-shire. As all Viking aficionados know, the place-name comes from an Old Norse word for an assembly site, found most notably at Þingvellir in Iceland, but also at several places in these islands, the two Thingwalls on either side of the Mersey, or Tynwald on the Isle of Man, plus a few scattered about the Scottish islands. On that brief visit to Dingwall, I wandered into the museum, and saw a few signs of Viking awareness, but not many. Otherwise, it was a charming place.

Now I read in The North Star that the very town centre car park in which I parked my car on that day is reported to be the site of the Viking Age assembly mound, according to some rather vaguely unspecified archaeological investigations (though not yet excavations) carried out last month. The various worthy persons interviewed in the article all foresee a great future for Dingwall as a Viking tourist hotspot. How things change in a few years...

While searching for a suitable image for this post, I came across the above golden bull on a handsome black plinth. If you look carefully, there is an attempt to render the name Dingwall in both Old Norse and runes, but, oh so sadly, such a dismal attempt, especially the runes. They are really neither one thing nor tother, and I'm not even that sure what exactly they are meant to spell. I predict a rash of dodgy 'runic' inscriptions in Viking tourist spots around the country, each one feebler than the last. Please, please, please guys, if you want to do something like that, get in touch with a real runologist, like those splendid chaps at Hotell Svava and Kirkwall Airport did.
Posted by Viqueen at 22:16