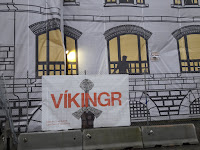 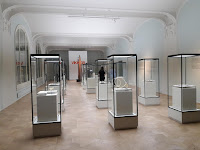 Entering the room is a delight. It's a beautiful room in its own right, but is also very beautifully lit and laid out. The cases are all the same size and it is easy to follow them through the room in a logical order, with each row of three given an introduction on the wall to the right. The labels on the cases are very low down (for smaller people, or those in wheelchairs?) but there is a booklet you can borrow which gives general information and full details of all the exhibits. (You can also download the booklet in either Norwegian or English.) The massive Dynna rune-stone at the end and the logo behind it break up the monotony and draw the eye through the room, and you get to appreciate the art nouveau details of this very fine building from 1902. 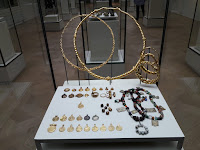 The exhibits themselves move logically from international contact and the riches acquired from there to war and its accoutrements, ending with religion and new ways. This does mean that the vast majority of the items displayed are of metal, with just a few beads and the rune-stone breaking up this heavy metal emphasis. But I'm not complaining, for some of the absolutely top metal objects from the museum's collections are on display: the gold hoard from Hoen, the Gjermundbu helmet, and plenty of coins, jewellery (including some made from bits of metalwork acquired in the west), Thor's hammers and weaponry. The other non-metal exhibit is the skull of the young lady from Nordre Kjølen that featured in a recent National Geographic documentary on women warriors which I discussed in a previous post. The curators of the exhibition are suitably cautious as to whether or not this burial represents a female warrior, I was glad to see, and present alternative explanations. 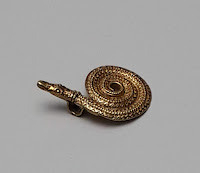 On the whole, I would say the exhibition is small but perfectly-formed, like the little gold serpent from the Hoen hoard pictured left, and well worth a visit. Also, if you buy a ticket to the Historical Museum, you also get in free at the current Viking Ship Museum on Bygdøy, also a beautiful building containing some fabulous objects. I only wonder why they called this exhibition Víkingr (just one Viking?). I myself would have gone for Víkingar (Vikings) or even Víking (a Viking expedition). Oh well, you can't have everything.
Posted by Viqueen at 12.1.20