Runes in Our Troubled Times

Back in the day when this blog was nobbut a baby blog, one of my first posts gave a quick mention to the Odinic obsessions of a certain Julian Cope, ageing musician and antiquarian who grew up in Tamworth. Twelve years later, the Other Half is still keeping not-very-musical me up to date with Cope's antics, especially when they have a Viking flavour, as they often do, such as his 2017 album Drunken Songs with a cute Viking ship on the cover. So I couldn't help noticing that his latest album, Self Civil War, includes a runic inscription which is very familiar to me (pictured above). It is of course one of the graffiti from the chambered tomb of Maeshowe, on the mainland of Orkney, which I have had occasion to mention one or two times before. Not that you would know this from the album, which nowhere explains what these funny marks are...

The runes read utnorþr : er fe · folhit · mikit, which in standard Old West Norse is Útnorðr er fé folgit mikit, meaning 'In the north-west is great wealth concealed.' What it actually means is anyone's guess, though I suspect there is a strong element of joke about it, like many of the other graffiti in Maeshowe, several of which play with the idea that there was once treasure in the mound. Why this inscription is on this album is also anyone's guess, though Cope has a long history of being interested both in ancient monuments and Norse stuff. A quick internet search shows that he was writing a version of this message (with what looks like a felt-tip pen) on a plastic-looking stone at the Lunar Festival in Tamworth in 2015. OK, so he wrote 'buried' instead of 'concealed', and 'north', instead of 'north-west', but he is forgiven for thinking that treasure is always buried and for not knowing the concept of útnorðr, which only features in my more advanced Old Norse classes. Like many Old Norse words it reveals a fascinating way of looking at the world, but would require altogether another blogpost to explain.

But Cope does appear to have been doing his Scandi homework, since the album also contains a song 'Lokis sympati' in Danish. I don't pretend to understand what it's about, even though my reading Danish is excellent. If you have any thoughts, let me know! The credits say 'All words by Julian Cope' so I have to assume he knows Danish. Good lad. I suppose this goes back to his interest in 'lost Danish music' which started in a charity shop in Melksham in 1999... 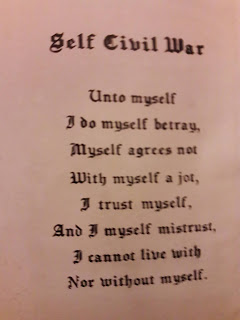 The title of the album is however not Cope's but taken from a poem from the 1630s, 'Self Civil War' by a certain Reverend Roger Brearley. This one I do understand, all too well, and also Cope's comment that it 'seems to sum up the psychic and political divisions that many modern Brits share with their Cavalier and Roundhead counterparts.' This is even more true now than when the album came out at the beginning of this year. Let us hope we can somehow find that elusive treasure, wherever it is.